The Social Market Foundation think-tank found that relatively affluent London boroughs such as  Islington, Hackney and Camden are falling well below the national average in terms of their residents’ happiness, anxiety, and life satisfaction. Wandsworth and Westminster are also affluent-unhappy.

That is part of a broader pattern of low wellbeing in cities: Sheffield, Manchester and Liverpool, where local Conservatives have been all but wiped out, are amongst the least happy parts of the country.

Debate about levelling up often focusses on the economic prosperity of different regions. But in a new briefing paper, SMF Chief Economist Aveek Bhattacharya points out that the Government says it wants to give as much weight to “wellbeing” as to wealth.

The logic of that position means “rich but miserable” voters should be included in the Levelling Up agenda, he suggested.

In yesterday’s Queen’s Speech, the Government confirmed its plans to bring forward a Levelling up and Regeneration Bill, that involves a legal commitment to provide annual updates on its mission to ensure that “By 2030, well-being will have improved in every area of the UK, with the gap between top performing and other areas closing”.

New SMF analysis shows that on average, places that are richer tend to be more miserable. For example, Islington, Camden, Southwark and Hackney are in the ten most miserable local authorities, despite being among the economically most successful.

In a list of 377 council areas, Wandsworth ranks 44th from bottom for happiness. Westminster was 66th on the wellbeing list.  Those boroughs were the Conservatives’ most notable losses to Labour in last week’s local elections.

By contrast, areas such as West Devon and Fermanagh & Omagh score highly on wellbeing, despite low rankings for economic prosperity.

The findings pose a challenge to the Government’s rhetoric and strategy around levelling up, which has tended to focus on “overlooked and undervalued” places rather than the capital. The White Paper offers little indication as to how it intends to address dissatisfaction in urban areas, beyond trying to ‘relieve pressure’ by encouraging people to move elsewhere.

The SMF paper says it isn’t clear why London and other big cities fare so badly on happiness. Low wellbeing scores could be linked to inequality, housing costs, crime, or a lack of social connections.

Better evidence on the causes of unhappiness among city dwellers must be a requirement of the Levelling Up agenda, the paper argues.

“The Government has a London problem – not just in terms of its political strategy, but also in terms of its mission to reduce inequalities in wellbeing. Islington and Hackney are not the sort of places that immediately spring to mind when we think of levelling up, but in terms of happiness, anxiety and life satisfaction, they are behind the rest of the country. We need to put similar effort into understanding and addressing the problems people face in these places as we do the economic challenges of ‘left behind’ areas if those gaps are to be closed.”

“Having promised to close gaps in wellbeing as part of the Levelling Up agenda, ministers must accept that their promises mean paying more attention to raising the happiness levels of city dwellers who might be described as rich but miserable. Levelling up means many things, including making sad Londoners happier” 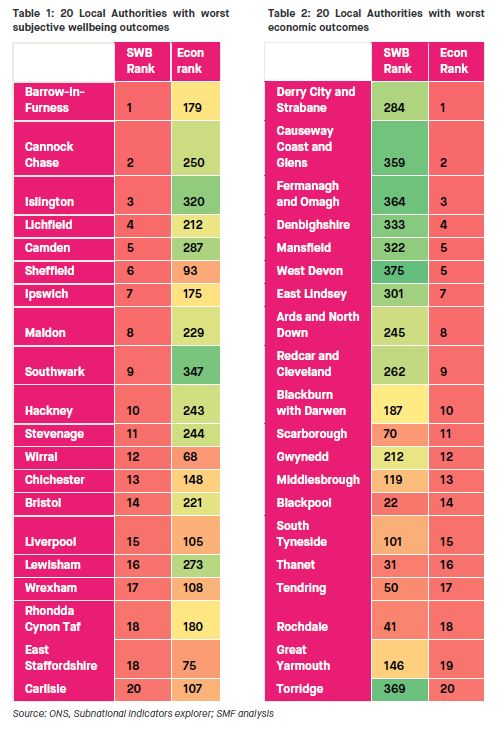 White working-class students and black British students risk missing out if schools focus on A-Levels as the main pathway to university and professional success, a think-tank warns today.