In the latest instalment of the SMF’s Ask the Expert series, we were joined by Oxford University’s Professor Barbara Petrongolo who gave an insight into new data on gender and the labour market during the Coronavirus crisis drawn from Understanding Society’s COVID-19 supplement.

Opening her presentation, Professor Barbara Petrongolo highlighted the importance of recognising that women are more heavily involved in childcare and domestic work, noting that before the pandemic, women in the UK were on average doing 16 hours of childcare per week, compared to 8 hours a week by men. Professor Petrongolo then highlighted the key differences in the impact that the crisis has had on men and women. Men were more likely to have their hours reduced or to be put on furlough. Women were found to be over-represented in the service sector and “critical sectors” such as health and social care.

But what impact did this have on work-life balance? With education and childcare services closing in March 2020, Professor Petrongolo found that the number of hours parents spent on childcare increased on average from 25 to 43 hours per week.  What’s interesting about the breakdown of these figures Professor Petrongolo noted, is that whilst women were still more likely to be the main provider of childcare, there has been a significant shift in the number of households where the father is the main childcare provider, increasing from 2.7% to 18%. 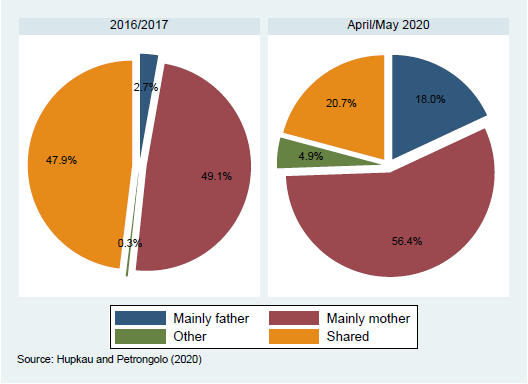 Will the changes borne out by the coronavirus pandemic lead to a lasting impact on the distribution of childcare? Professor Barbara Petrongolo said this is a possibility due to the radical changes in family life, with reversals of gender roles in many homes, and home working becoming a more common occurrence leaving an impact on productivity and work-life balance.

The focus should be kept on parental involvement in childcare when restrictions ease, but we should be wary of the impact that the significant increase in women’s childcare hours during the crisis could have in the long term, said Professor Petrongolo. The gender pay gap in the 21st Century is related to children and childcare, known as the motherhood penalty, which Professor Petrongolo said could have long-term consequences for the earnings of working mothers.  Professor Petrongolo highlighted that women are much more likely to be balancing childcare with working from home during the pandemic, which can have an impact on productivity and the way they are perceived on the other side of the screen within the virtual work environment.

After the 2008 Financial Crisis, inclusion was moved down on the agenda, noted the CBI’s Matthew Percival. However, Matthew said that “a great humanising of workplaces” has taken place during the Coronavirus crisis, with employers becoming more aware of their workers’ homelives and being obliged to recognise that there may be disruptions to the working day. Matthew argued that this, together with movements such as Black Lives Matter, mean that businesses will respond very differently when compared to the 2008 Financial Crisis, and inclusion will not be put aside. Matthew Percival urged businesses to continue their gender pay gap reporting despite the possibility of a lack of progress due to the “compositional impact of Covid-19”.

Baroness Nicky Morgan highlighted the struggle of balancing working from home with childcare and provided anecdotal evidence of some women who had asked their employer to be furloughed in order to manage both at the same time. Whilst hybrid working could result in more opportunities for mothers returning to work after the pandemic to progress in their careers, Baroness Morgan warned of one potential pitfall in hybrid working, that of “presenteeism”. After the pandemic, business leaders and managers will need to be aware of the potential bias in favour of those attending the office regularly, something which mothers balancing childcare responsibilities may struggle to do

Baroness Morgan made the following recommendations to policymakers:

While the crisis has resulted in disruptions to the home and work-life balance, Baroness Morgan concluded that it could give families the opportunity to discuss how they can redefine set familial roles and working patterns.

This event took place at the beginning of a second month long lockdown now imposed across England. A notable difference is that schools and childcare services will remain open. What impact will the second lockdown have on working parents? Is homeworking here to stay and will it have a lasting impact on the gender pay gap? While the long-term impact of the coronavirus restrictions remains to be seen, this event has shown that policymakers should take into consideration the different experiences of men and women during the crisis into decision making moving forward.

The COVID-19 gender gap: the impact of the pandemic on gender inequalities in the labour market

At this event, Director of the CEPR Labour Economics Programme, Professor Barbara Petrongolo will present new data drawn from Understanding Society’s COVID-19 supplement- a longitudinal study of the impact of coronavirus on UK households.
More
Publication

Gender equality and the 100 year life

This is the second report of the series focusing on how the 100-year life may affect Britain’s society, economy and public services. This report focuses on gender equality and how policymakers can make the 100-year life work for women.
Read
Publication

The parenthood penalty? Exploring gender, family and pay in London

This report, commissioned by Peabody, provides new insights into the lives of individuals living in London – in particular, with respect to their living standards and financial situation.
Read
Page 1 of 1