Drawing on new public polling as well as long-run data, this study charts how the shape of the extended family has evolved over time, before going on to explore how the support given across the intergenerational family has changed historically and how it may alter in the future.

Despite the positive stories that emerge of people’s readiness to support older and younger relatives, the paper identifies a number of potential challenges ahead associated with societal and demographic shifts. These include: how we can help families provide care for each other as the generations no-longer necessarily live together, ensuring we have the right guidance and advice in place to aid good financial decision-making and assessing what strains older people may come under as they balance later retirement ages, frail living relatives and demands on them as grandparental carers. The report concludes that in these instances and also more broadly, policies need to be designed around the wider needs of families rather than treating individuals and their choices in isolation.

Too often, our ageing society is observed with the growing costs of health or state pensions in mind. However, the implications for families and for support provided across the generations are less well-explored, though no less radical.

Drawing on new public polling as well as long-run data, this study charts how the shape of the extended family has evolved over time. It goes on to explore how the support given across the intergenerational family has changed historically and how it may alter in the future.

Recent reforms and new commitments from the Conservative Government make this important policy territory. The last parliament saw the introduction of a ‘family test’ to ensure that ‘potential impacts on family relationships and functioning are made explicit and recognised in the process of developing new policy’. As the government acknowledged at the time, too often policies treat the population as individuals or households rather than as families and networks of dependencies. This is particularly true about the support network that is the intergenerational family by which we mean grandparents, parents and children as well as great-grandparents and great-grand-children.

Thinking through the role of the wider family is also becoming more important across many policy areas. Unpaid care – much of it provided by family members – is bearing a greater strain of social care support as the population ages. Families also now have greater flexibility to help each other: 6 April 2015 saw the introduction of new pension freedoms with retirees given total flexibility over what they do with their Defined Contribution pension savings. This has expanded the scope for the handing down of wealth as retirees make decisions on their own requirements in retirement alongside the needs of their children and grandchildren. These new freedoms have been complemented by additional scope for bequests on death: the Conservative Government is raising the effective inheritance tax threshold to £1 million. The underlying philosophical argument being ‘it’s your money, you worked hard for it – and you should be able to pass it onto your loved-ones.’

Changes to the structure of families

Chapter 2 illustrates out how the structure of the intergenerational family has evolved over the past century. Families have tended to get longer and thinner over time due to a combination of longer lives, fluctuation in the average age of first-time mothers and reduced fertility. Families with multiple generations alive simultaneously are now the norm and having four or more generations is already not unusual. These phenomena are set to become more common. At the same time, there has been a trend towards greater heterogeneity of family types and the traditional ‘nuclear family’ has changed dramatically.

Importance of intergenerational support within the family

But, these are just the financial flows, and practical assistance is also extremely important. Reliance on practical care – provided upwards to parents and grandparents and downwards to grandchildren and greatgrandchildren – has grown markedly in recent decades. This is despite the fact that there has been significant geographic dispersion of the family and a notable growth in one child families making it more likely that parents do not live close to an adult child.

Drawing on these trends over time and new opinion research, the paper identifies a number of potential challenges ahead associated with these societal and demographic shifts.

At the heart of each challenge is the need to cast policy prescriptionsaround the wider needs of families rather than observe individuals and their choices in isolation. Recognising the obligations, dependencies and behaviours within family networks should inform how we design policies. In so doing, these networks can be optimised and sustained. 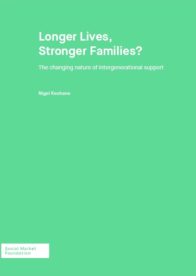 A new report from the Social Market Foundation (SMF), released on Tuesday, reveals the changing nature of inheritance in the UK and how patterns of financial and non-financial support across generations of families have evolved as we live longer.
Read
Publication

Intergenerational fairness in the coronavirus economy

This briefing paper, written by Research Director, Scott Corfe, discusses the need for the economic costs of responding to coronavirus pandemic to be shared fairly across the generations.
Read
Publication

This research examines the nature of intergenerational financial support taking place in modern Britain and its long-term implications at an individual and societal level.
Read
Page 1 of 1