Missing the story: the UK media’s neglect of Further Education

This essay is not a conventional think-tank report. It is not, directly at least, about government policies or national priorities, but about the climate in which policies and priorities are set. It is about education, but also about journalism and the media industry, and it is written by a former journalist who still, from time to time, works in that trade.

Journalism matters. The selection of topics for coverage matters most of all. What makes news – and what does not – helps shape those national priorities, from which flow decisions by politicians and other policymakers about how to allocate scarce resources, including money and – sometimes more valuable — attention.

This essay is about something that doesn’t make news, doesn’t get covered, and the effects that has. It’s about Further Education (FE).

This report is sponsored by the Further Education Trust for Leadership. 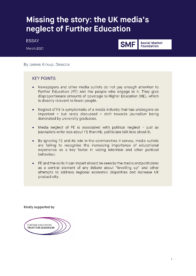 This report, supported by the Further Education Trust for Leadership, examines the relationship between further education (FE) and higher education (HE) and assesses how the two sectors cooperate and compete.
Read
Publication

This report, kindly supported by the Further Education Trust for Leadership, argues that a shift in mindset is needed to promote and strengthen leadership in further education colleges. Reforms to the system are necessary as well as cultural change in the sector and beyond.
Read
Page 1 of 1