Unlocking the gridlock: How a more democratic planning system can help fix the housing crisis

This publication examines the inadequacies of the current planning system in providing necessary levels and quality of housing, and urges that any reforms must focus on giving local residents authority over developments in their area - to help fix the housing crisis.

The report argues that the current system creates ‘gridlock’ because it gives too much power to planning authorities, and offers too little opportunity for neighbours  to find ‘win-win’ solutions that protect the interests of existing residents while also creating new housing.

The report was written by John Myers of the PricedOut and YIMBY Alliance campaigns,  which press for more new housing. Drawing on the insights of Nobel prize winning economists Elinor Ostrom and Ronald Coase, Myers suggests that developing a system that encourages developers and residents to strike mutually beneficial bargains could be a way forward. He argues for a ‘peer-to-peer’ decision making system that allows local people direct powers to allow more development – tailored to the region (rural or otherwise).

The report highlights the continuing burden of the housing crisis, and urges the government to take action.

Myers points to official estimates that the total value of UK housing is now £3.7 trillion more than the cost of building those homes, proof that the housing market is functioning poorly. One cause is  a   planning system that create enormous inefficiencies that force up the cost of housing, with a range of negative consequences:

The report floats four ideas that the Government should pursue in its forthcoming Planning Bill, all focused on democratising the planning system, and allowing more housing to be provided whilst preventing local residents fearing the loss of control over their neighbourhoods. 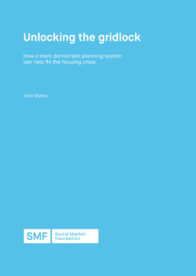 The shift towards digital banking, accelerated by the pandemic, creates many opportunities and offers benefits for the economy as a whole – but also brings with it some risks. This report explores future access to retail banking services, and the best way to ensure any such changes take place fairly and sustainably, and no one is left behind.
Read
Publication

Putting British success on the menu: Time for a UK alternative proteins strategy

This report calls on the UK Government to adopt a comprehensive policy stance on alternative proteins.
Read
Publication

Across the world, approaches to cannabis regulation are changing. This report reviews evidence from jurisdictions that have liberalised cannabis, assessing how they have impacted health, crime, and economic outcomes, comparing them against the UK’s prohibition regime.
Read
Page 1 of 1