Working Well: How employers can improve the wellbeing and productivity of their workforce

In this report we consider ways in which we can reduce stress and boost workplace engagement to help improve UK productivity.

We present new analysis of Understanding Society, a longitudinal survey of 40,000 households across the UK. We examine how stress affects workers, reducing productivity, and how low financial resilience is a substantial contributing factor.

The UK has a significant productivity problem. We’re at least 25% less productive than the major economies we compete with. There’s been plenty of discussion of the big factors behind this – our relatively weak capital investment, skills shortages and poor infrastructure. But to fix each of these requires substantial investment and long-term political engagement. Other, less prominent factors, like engagement among our workforce, could provide a useful boost to productivity while we’re waiting for action on the big issues. Experimental trials prove that making people happy can increase productivity by 12%, and that lower happiness is systemically associated with lower productivity.

We work harder and achieve more when we feel like we have control over what we do, and find it rewarding. We do better in jobs that we like. But many industries have seen job satisfaction decline over the past decade. The public sector, administration & support services, real estate, accommodation & food services & retail have seen particularly sharp falls. Never mind struggling to make the big decisions necessary to keep the UK economy competitive, we’re not even making the most of the skills and talents we do have thanks to a lack of engagement.

Nearly half of all workers (40%) experience at least one form of stress which could reduce productivity, for example a lack of concentration or loss of sleep (see Figure A).

Figure A: Proportion of workers in each industry reporting at least one sign of stress which could impede their performance at work 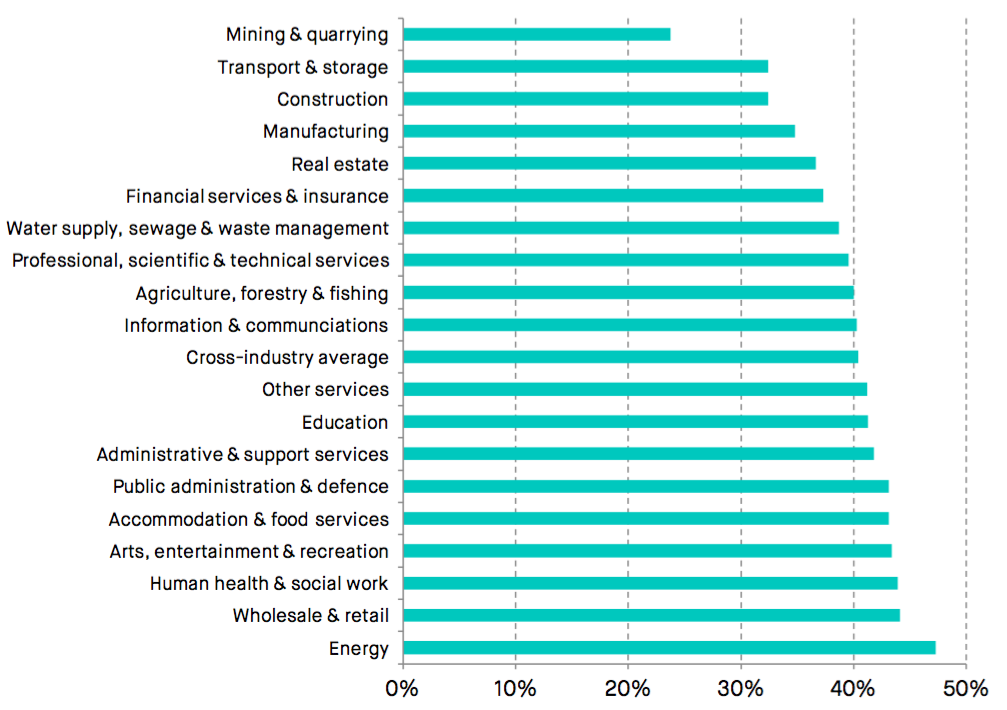 Source: SMF analysis of Understanding Society Wave 5, 2013/14. Includes all those with a job who report at least one of the following: Mental health meant less accomplished than usual over the past four weeks; undertaking work or other tasks less carefully than usually at least some of the time in the last four weeks; concentrating less than usual and; losing sleep over worries more than usual.

Our new analysis shows that low financial capability and resilience is a significant cause of stress across the UK workforce. This is one area where every employer, regardless of size, has an existing relationship with their staff, and could potentially reduce stress and improve productivity.

These money worries have a clear impact on how people feel and behave as they go about their day-to-day lives and jobs.

When we look at the financial situation of UK households, we quickly uncover the financial vulnerabilities behind these money worries. Even 10 workers in relatively well-paid industries often have low levels of savings and lack financial resilience.

The UK’s workforce lacks financial resilience. It’s clearly affecting our ability to concentrate at work and blunting our productivity.

What can we do?

Some firms have tried to reduce workplace stress and improve productivity in novel ways, like allowing pets in the office, giving employees unlimited holiday or providing nap pods. For many businesses, however, these simply wouldn’t be practical. Here, we look for alternative interventions that could help businesses across the economy and the public sector to boost productivity.

Employers always have an impact on the financial wellbeing of their workforce as the primary source of income for most people. And as poor financial resilience affects all income groups, the answer isn’t just higher levels of pay. Instead, employers need to help their staff to learn healthy financial behaviours and build financial resilience.

We’re already using workplace pensions to build financial resilience later in life. One option is to extend auto-enrolment policies to include short-term savings or income protection insurance as well as pension savings. But auto-enrolment programmes are difficult to design and take a long time to organise. The government may want to consider other ways it can encourage employers to provide income protection insurance or short-term savings,

But offering financial products is an increasingly complex business, and many firms wouldn’t know where to start. New financial mutuals, providing affordable savings and credit products using bonds of trust between those in particular professions, could be one way of building a culture of financial resilience through the workplace.

Tax incentives are already offered on some workplace savings and investment programmes, but only the largest employers are usually able to make these schemes available to their workforce. Extending these privileges to new workplace savings schemes would increase the number of workers who can benefit and maximise the number of households able to build financial resilience by saving through their payroll. Firms could also consider simple changes, like printing a recommended monthly savings goals on payslips or offering budgeting applications alongside online payroll to help improve the financial capability of their teams.

A new study entitled Working Well: How employers can improve the wellbeing and productivity of their workforce, from the Social Market Foundation think-tank conducted in partnership with financial employee benefits provider Neyber, finds that one in eight workers (13%) report that money worries have affected their ability to concentrate at work. The study shows low financial resilience is a significant cause of stress across the UK workforce.
Read
Publication

London: Working for Everyone?

This report, commissioned by Peabody, provides new insights into the lives of individuals living in social housing in London - in particular, with respect to their living standards and financial situation.
Read
Publication

This report seeks to understand whether and how policymakers can use the tools at their disposal to shape corporate-decision making. In particular, it focuses on how to encourage businesses to...
Read
Page 1 of 1