Remain-voting areas will be hardest-hit by Brexit

Remain-backing parts of Britain will pay the highest price for Brexit’s disruption of British trade, according to new research that said the average person could be £1,700 worse off outside the EU.

The local council areas that will be hardest-hit by Brexit are in the wealthier south-east of England, which tended to support the Remain campaign, the research shows.

Those places will suffer more because they rely more heavily on trade in services – including financial services – which is more sensitive to trade barriers than trade in the manufactured goods that northern, Leave-leaning areas rely on for trade.

The analysis was presented at the Social Market Foundation think-tank in conjunction with the Economic and Social Research Council by Nikhil Datta of the LSE Centre for Economic Performance.

His findings are at odds with an official Whitehall assessment of the impact of Brexit, which suggests that Leave-voting areas in the north of England are likely to pay the highest price for any Brexit-related disruption to UK trade.

Datta said the difference arose because the LSE team’s work took full account of “trade elasticities”, calculations which show how significantly different types of trade are affected by tariffs and regulations.

He estimated that a “soft” Brexit, where Britain remains in the Single Market with a deal like Norway’s, would mean that annual economic growth is 1.3% lower over the next ten years. That is equal to around £850 per person in Britain, he said.

A “hard” Brexit where Britain leaves the EU without a trade deal would mean growth was 2.7% lower, equal to £1,700 per person, he said.

However, the economic impacts of Brexit will not be evenly spread across the UK, with some places paying a much higher price than others.

Datta’s “trade sensitivity” analysis of economic activity in local council areas reveals which parts of the UK will lose the most if European trade is reduced.

The hardest-hit local authority area will be the City of London, which faces a 1.9% hit from a soft Brexit and would lose 4.3% in a hard Brexit.

The other areas hardest hit are: Aberdeen City; Tower Hamlets; Watford; Mole Valley in Surrey; East Hertfordshire; Reading; Reigate and Banstead, Worthing; and Islington.  All voted to Remain in the 2016 referendum.

By contrast, several of the areas that will pay the smallest price for Brexit – including Eden in Cumbria, South Holland, North Lincolnshire and Melton – all voted to Leave.

However, Dr Datta warned that all regions of the UK will be worse off after Brexit, and said that wealthier southern areas will be better-able to adjust to the shock of leaving and return to growth.

Such regions had demonstrated such “resilience” after the financial crisis, he said, while poorer areas in the north were still suffering its effects.

Datta’s analysis does not consider the possible economic benefits of new trade deals that Britain might strike outside the EU.  However, he said that even the most optimistic projections of the benefits of free trade deals with countries such as the US, China and India were not enough to offset the costs of Brexit from lost European trade.

“The impacts that might have on our trade is not as significant as these costs” from leaving the EU, he said.

“This analysis shows that there are no immediate gains from Brexit, only different degrees of loss.  The fact that wealthier areas might lose more in the short-run does not change the need for better support for skills, growth and economic resilience in the poorer parts of Britain where Leave was most popular.” 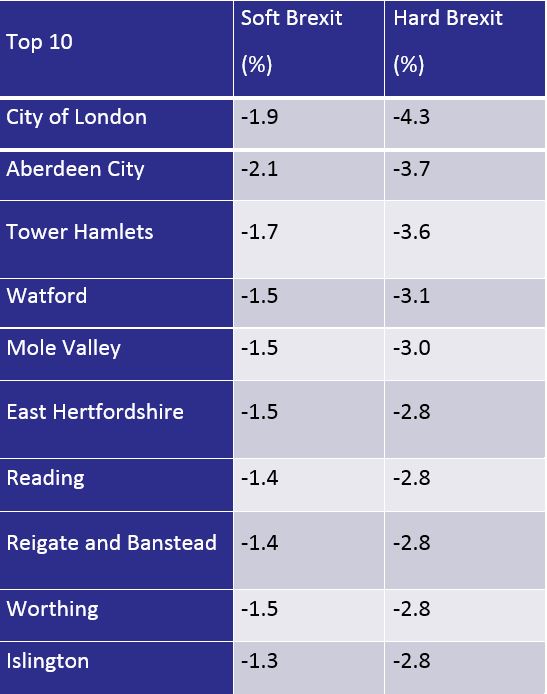 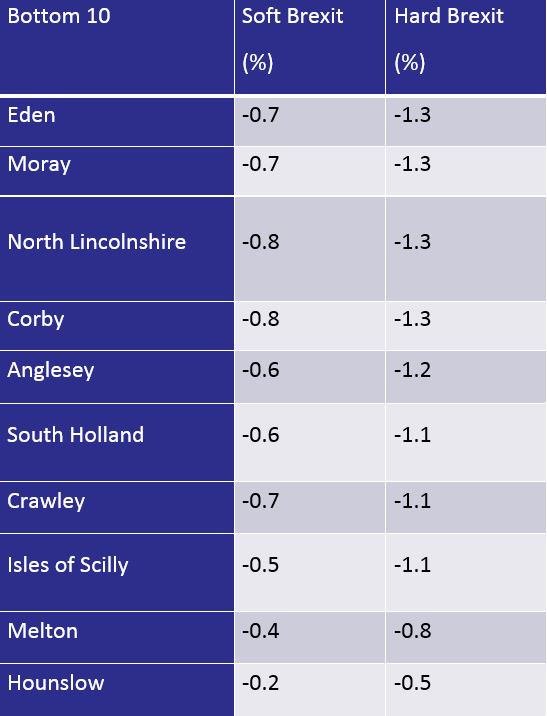 Our Ask the Expert seminar series is run in association with the Economic and Social Research Council (ESRC).