The growth in electric vehicles – which do not incur fuel duty – will eventually leave the Treasury with a £30bn gap in tax revenue, equal to around 2p on the basic rate of income tax, the SMF said.

To avert that shortfall, ministers must have the “courage” to tell voters that a shift to road charging is “inevitable and sensible”, the SMF said.

The SMF report includes polling showing that more people support (38%) than oppose (26%) road pricing as an alternative to fuel duty. The poll was carried out by Opinium, with a sample size of 3,000.

The SMF also conducted focus group research which showed that voters regard fuel duty as more unfair than other taxes.

That view is supported by SMF analysis that shows fuel duty is regressive, falling more heavily on lower-income drivers. Even though such motorists drive fewer miles than richer ones, their fuel duty costs make up a greater share of their disposable income, the SMF calculated.

To fill the growing hole in the public finances and address unfairness in roads policy, the SMF said ministers should introduce a “simple” national road pricing regime with a fixed per mile charge. That scheme could be “revenue neutral” meaning it raises the same sums as fuel duty, but distributes the cost in a fairer way.

The report also makes the case for including a free “mileage allowance” akin to the tax allowance, meaning low-use drivers would not pay any charge and high-mileage drivers would make a contribution proportionate to their use of the roads.

A road-pricing regime with a flat rate for each mile driven and an annual “free” miles allowance for every driver would cut annual costs for almost half of all motorists, the SMF said. (See Notes)

Lord Young of Cookham will refer to the SMF report in the House of Lords on Monday during a debate on the economy in the Queen’s Speech.

“Successive administrations have looked at the case for road pricing and found it perfectly reasonable and sensible – then done nothing because they believe the public will not accept the change.

“This report challenges that assumption. It shows that, as so often, the public are more sensible and mature than political debate gives them credit for. When voters think about the challenges ahead for transport and tax, they accept that road pricing is a prudent and necessary step to take.

“The public are open to innovation because they know that the world has changed and will continue to change, so policy must change too.The welcome shift towards electric vehicles raises a clear question about the future of fuel duty levied on petrol and diesel. The unpopularity of that duty has grown steadily too. As this report shows, a well-designed system of road-pricing would be fairer and more popular than the status quo.”

“The current system of fuel duty is unfair, unpopular and unsustainable. A properly designed road-pricing regime will be fair, popular and good for the public finances and the environment. Voters know this, and privately so do the politicians.  All that’s needed is the political courage to accept that road pricing is inevitable and sensible.

“The costs of driving are a factor in the cost-of-living crisis hitting many households, and fuel duty hits low-income people hardest. Road-pricing would be a progressive alternative, taking some of that burden away from those least able to pay it.”

The SMF report is entitled Miles Ahead. It was supported by a research grant from the European Climate Foundation.

The report comes as ministers prepare to respond to the House of Commons Transport Select Committee, which earlier this year said that the Government should start work on a road-pricing system “without delay”.

Recommendations from the SMF report:

Chart 1: Mean fuel duty costs versus mean road pricing costs for a range of scenarios, vehicle-owning households. Per-mile road charge set at a rate that raises the same amount of revenue as fuel duty does at present. Free mileage is on a per vehicle basis. 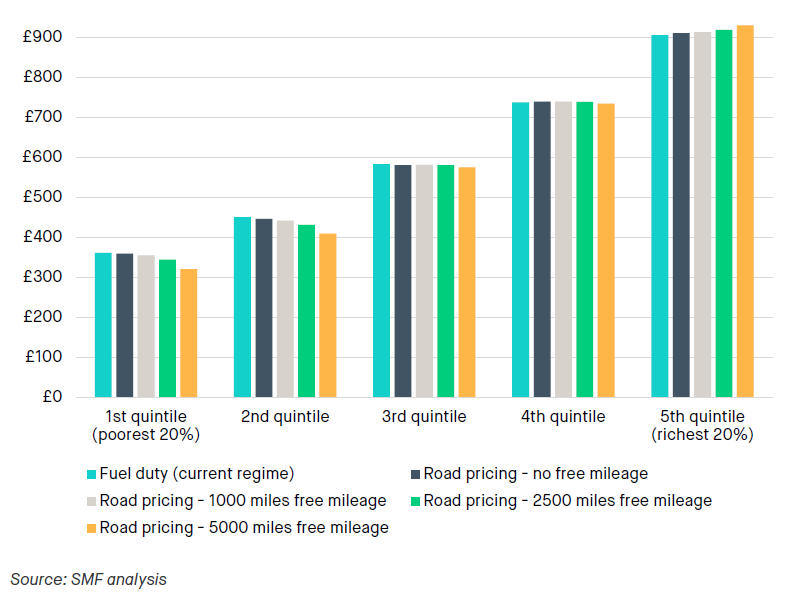