Ask the Expert: Supporting ex-offenders on their path to rehabilitation and employment

Before the panel discussed ex-offender rehabilitation and employment, Jennifer Rubin, ESRC’s Executive Chair welcomed everyone with a few words about the ESRC and our Ask the Expert series.

Frances placed emphasis on the fact that England and Wales have more prisoners serving life sentences than in all other 46 nations in the Council of Europe.

The Minister highlighted the following during his talk:

The Ministry of Justice (MoJ) has introduced the Educational Employment Strategy, which allows offenders to obtain the training they need to find jobs on release. The Minister highlighted the positive change of attitude coming from employers, Timpsons being one of many, with regards to hiring ex-offenders. This can provide us with an opportunity, especially when we have skills shortages. The Minister also pointed to the New Futures Network, which links employers to prisons and supports offenders obtaining employment.

This summer, the MoJ set out £40 million to go into increasing security, stopping drugs getting in and making sure prisons are in a decent and humane condition. He stated that progress is being made in rehabilitation however, prisons themselves are only a part of it. To address homelessness amongst prison leavers, his department has committed £6 million for ground-breaking housing pilots in three prisons across London, Bristol and Leeds.

Professor McNeill used Scottish terminology in describing the rehabilitation puzzle by calling it a rehabilitation ‘fankle’, meaning tangle. The way we engage with people who are being punished is critically important for their prospects of returning successfully, and if they can’t return successfully then we damage society for all.

Professor McNeill discussed ‘reintegrative momentum’ and how it is difficult to generate and very easily lost by penal agents in three penal moments: 1) when we sentence, 2) when we implement sentences and 3) when sentences end.

He explored a model of punishment that places rehabilitation at its centre: 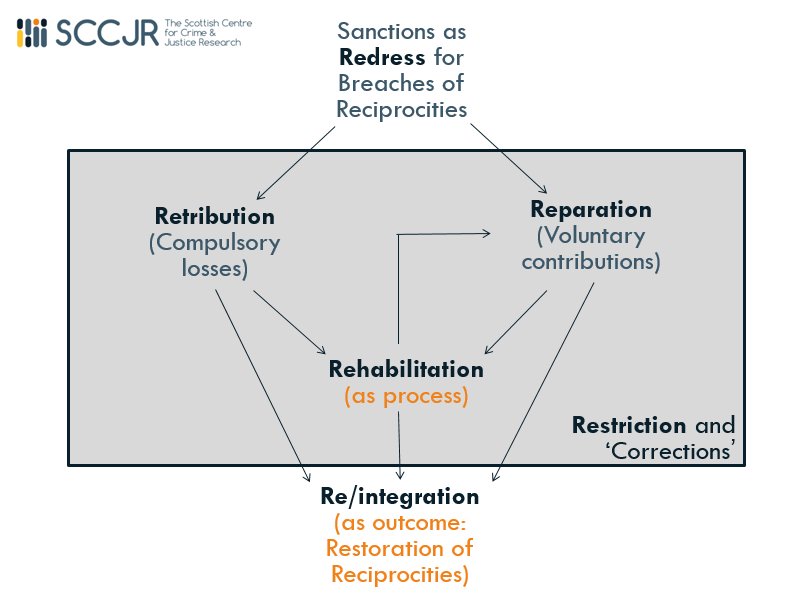 He highlighted that a lot of the time in criminal justice, we make the mistake of working on the offender when we talk about rehabilitation. It is about the process of mutual recognition between state, citizen, civil society and people involved.

The European Committee for the Prevention of Torture and Inhuman or Degrading Treatment or Punishment:

The 2013 United Nations Committee Against Torture report on the UK:

Dr Tomczak placed emphasis on the fact that we have the highest imprisonment rate in Western Europe, followed by Scotland. The prison population has doubled in the last decade against static/falling crime rates, which according to Dr Tomczak has been caused by replacing welfare with workfare – the idea of benefits being conditional on attempting to secure work.

She highlighted that although the penal voluntary sector can provide a valuable and distinctive space for supporting criminalised individuals, it can’t create resources on its own. It can’t create affordable housing for all the people leaving prison every year nor can it create employers who have an understanding of the difficulties ex-offenders face.