In our latest ESRC-sponsored Ask The Expert seminar, Luke Sibieta of the Institute for Fiscal Studies discussed the Government’s proposed new funding formula for schools in England, together with its implications. The formula determines the way that funding is allocated between different schools; and the changes could result in a radical shake-up of the way English schools are funded.

The Government’s new school funding formula should help remedy inconsistencies in the current system by ensuring similar schools are given similar levels of funding. But we don’t yet know the details of the formula – and these details may create difficulties during the transition, and for those schools set to lose out.

The context to the changes is a plan to reduce real spending per pupil by at least 7% between 2015-16 and 2019-20. This will result in substantial reductions in the average funding per pupil, and save the Government large sums. Spending is likely to drop below £6,000 per secondary school pupil, but this reduction follows very large increases in spending throughout the 2000s. 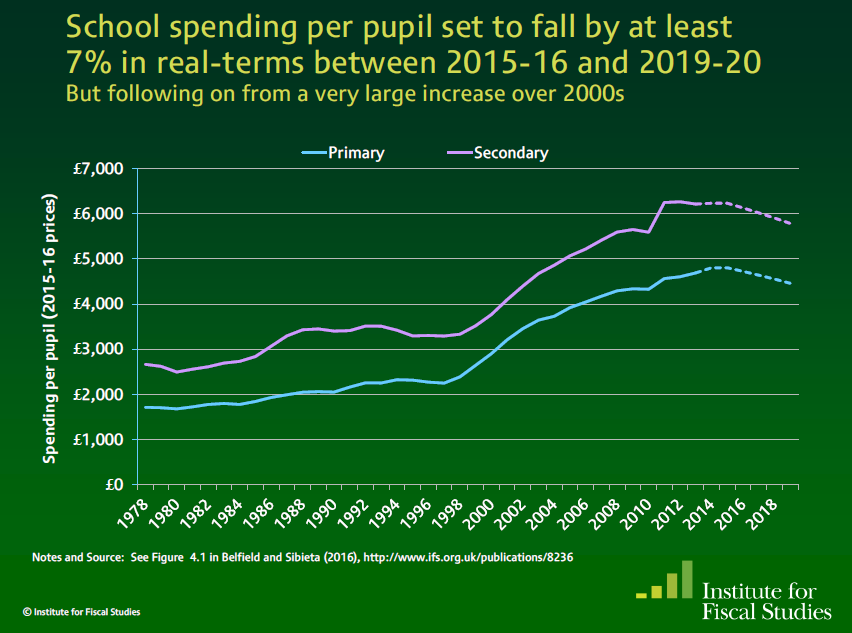 The current school funding system works by allocating funds to Local Authorities (LAs), who in turn pass on payments to schools in their areas. Not all LAs are given the same level of funding: this would depend on, for instance, the level of deprivation locally, with more deprived areas getting additional money.

Currently, there is a wide variation in funding per pupil across LAs. The school budget per pupil in Wokingham, for example, is just over £4,000; but in Hackney it is nearly £7,000. This reflects not only differences in levels of deprivation, but also local labour market requirements – teachers in Hackney need more to make a living than in Wokingham.

However, school funding doesn’t depend solely on the level of funds being given to each LA. There is wide variation in the ways in which LAs allocate funding to schools in their area. Schools in different LAs, but with otherwise similar characteristics, can get very different levels of funding, largely because LAs each have their own funding formulae, reflecting different local priorities.

Due to the complexities of having 152 different LA funding formulae, there are large differences in how similar schools are funded, and these differences have been growing over time. One key decision LAs have to make currently is how to divide funding between primary and secondary schools. There are very large differences in how LAs do this. In Bromley a Key Stage 3 pupil will receive over 80% more funding than a primary school pupil; yet in Bury a similar Key Stage 3 pupil will receive just 15% more than a primary school pupil.

This illustrates how local decisions on allocating funding can leave schools with similar characteristics, but in different LAs, with very different levels of funds. 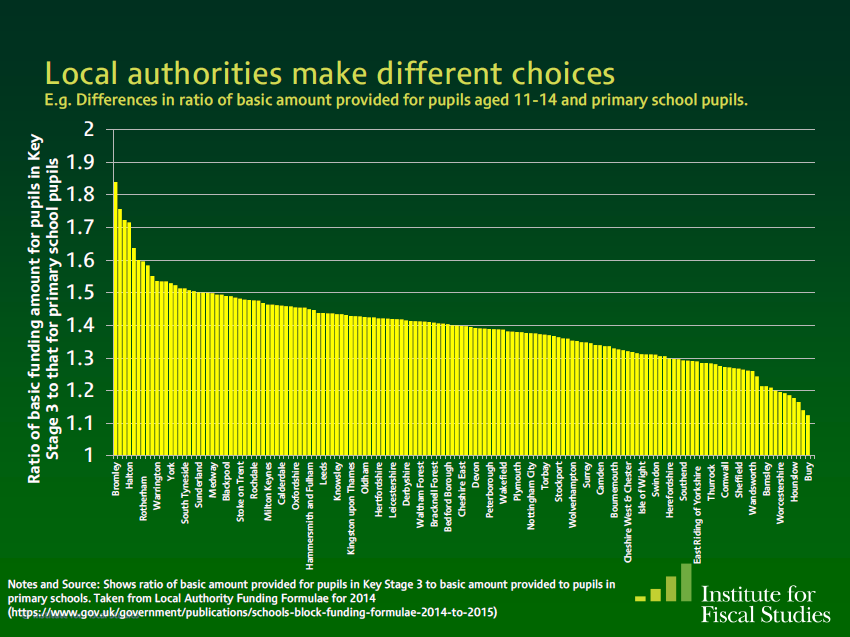 The new national funding formula proposed by the Government replaces these 152 different local-authority-based formulae with a single school-level formula for all schools across England. The new formula can be seen as an attempt to remedy inconsistencies created by the different ways LAs allocate funding to schools. In theory this will, in the long run, ensure schools in similar circumstances receive similar levels of funding per pupil.

But will it work? Some schools will become better off than they are currently, but – in particular given the 7% real-terms reduction in overall spending – some will be losers. Schools that face reduced funding are bound to have difficult decisions to make about the number of staff they can afford to retain, and getting this process right is likely to take time. The new formula is due to be implemented from 2019-20, with a transitional phase starting from 2017-18. Schools facing reduced funding are to be offered a ‘minimum funding guarantee’ to ensure all changes to funding are not realised in the same year; the extent to which this helps cushion the blow is likely to depend on the precise details, which haven’t yet been announced.

The new formula is likely to result in a reduction in funding for inner London schools. It remains to be seen whether this will affect their ability to continue with recent strong improvements in pupil attainment. In theory, this would make more money available for schools in other areas. However in practice the sums are not likely to be substantial, in part given the small number of inner London schools relative to the rest of England, and in part because of the reduction in school spending nationally.

Lastly, there may be reasons why LAs currently allocate funding in their own idiosyncratic way, which may prove difficult to legislate for in a ‘one-size-fits-all’ model at the national level. The Government claims that the new formula will make school funding more predictable from one year to the next. But this depends whether the school knows the next year’s intake, and how variable the intake is. It may be that some LAs currently ‘smooth’ school funding from one year to the next, in order to minimise difficulties in retaining staff. Perhaps some LAs have adapted to the different funding requirements of schools in rural areas. Again, the devil may be in the detail of the exact Government proposals – and we are yet to find these out.

Listen to a podcast of the event here:

Ask the Expert is the SMF’s lunchtime seminar series, run in partnership with the Economic & Social Research Council (ESRC).

Building on from the success of Chalk + Talk, the SMF Ask the Expert series brings the best policy output from the world of academia into the heart of Westminster.

This new series of events is aligned with current government consultations and parliamentary inquiries, giving policymakers the opportunity to engage with experts in those policy areas.

To suggest a subject for a future Ask The Expert event, please contact the SMF’s events officer Hannah Murphy via hannah@smf.co.uk.