Autumn Statement: “OBR, Where art thou?”

The SMF’s director Emran Mian asks whether the OBR is providing enough of an independent assessment of the Government’s plans.

This Autumn Statement was humbling for policy analysts and civil servants. There we were in advance thinking about new approaches to delivering public services for much less money; and resolving the least worst way to remove money from tax credits. Thanks largely to the new OBR outlook for government receipts, both departmental cuts and welfare cuts are now much softer. The lesson is that we policy folks basically work inside the error bar on economic forecasts.

So you can read this blog purely as a desire for revenge . . . but the more I think about the OBR outlook, the more problems I find in it. Let me be clear: I’m not suggesting that the OBR has colluded with the Chancellor; or that there are flaws in its modelling approach. However, a number of its working assumptions raise questions about how much of a challenge or independent assessment it provides of the Government’s plans.

The first is an inconsistency in how the OBR treats the Government’s policy ambitions, rather than what it construes as firmer policy commitments. Look at what it says about fuel duty.

To its credit, the OBR is explicit about the ‘policy risk’; nevertheless it constructs its forecast on the basis of a policy confirmed privately to it by the Government, even though the Government has departed from that policy publicly several times. The IFS has calculated in the past that the gap between the then ‘policy ambition’ and what the Coalition Government did in practice was something like £5bn per year – serious money.

By contrast to its acceptance of the Government’s policy ambition now on fuel duty, the OBR has chosen to ignore the Government’s stated aspirations on raising the personal allowance and the higher rate threshold for income tax. This is how it explains the judgement it has made:

In other words, nothing in the OBR forecast – including the central scenario by which the Chancellor will achieve a budget surplus by the end of the Parliament – assumes that the Government will deliver what felt like pretty explicit commitments from the Conservatives’ election campaign. Incidentally, they cost something in the order of £6bn in reduced tax revenues by the end of the Parliament – they’re hardly small adjustments. So why is one ‘ambition’ or ‘intention’ – on income tax – treated as less solid than one on fuel duty?

One obvious answer may be that the Treasury has told the OBR that raising fuel duty in rise with inflation is much more likely to happen than actually following through on those income tax giveaways. So the OBR is following what it has been told about Government policy. If that is the case, then this is pretty interesting. Can we please be told?

If, on the other hand, the OBR has not had such a clear and explicit steer from the Treasury that one policy ambition is more concrete than the other, then it’s harder to see why the two cases should be treated differently.

My reason for focusing on this pair is that the judgements on both, while potentially inconsistent, flatter the fiscal outlook. There may be other inconsistent judgements that do the opposite but I haven’t found them.

Another OBR judgement that potentially flatters the fiscal outlook is the view they reach on various asset sales. This is a more complex case than the tax cases I’ve mentioned, because asset sales score differently across deficit and debt totals depending on the type of asset plus the liabilities and future revenues associated with it. Whereas higher tax revenues always flatter the fiscal outlook in a more or less obvious way, asset sales are coloured in shades of grey. Nevertheless I keep being surprised by how the OBR treats student loan sales. This is what it says in the latest document: 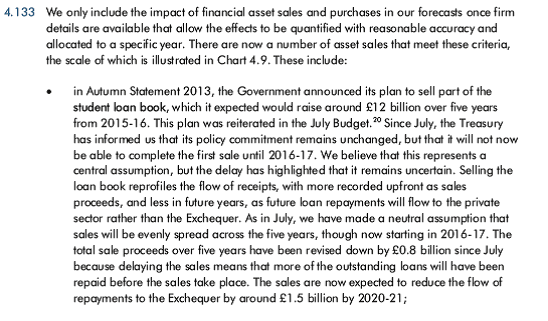 The key point here is that the Treasury expects £12bn in receipts from sales, starting from 2015-16, but no sales have yet happened and the Treasury no longer expects the first sale to happen until 2016-17. So the OBR has pushed back its expectation of when the receipts come in. Nevertheless it does expect them.

The background here is that the legislation allowing student loans to be sold was passed in 2008 and still no sales have been made. I suppose another year’s delay is no big deal when 7 years have already passed but I’m struggling to understand when it is that the OBR will conclude – or if indeed it has the remit to conclude – that the Treasury’s intention to sell the loans will remain forever an intention and hence loan sales should be removed from the forecast of receipts.

This issue feels less urgent now that the spending cuts have been moderated but it may arise again in the future. Nevertheless the contrast with how the OBR treats taxation – despite some of the inconsistencies I’ve identified above – is pretty stark. If the Government announced a 90% new tax on pasties, the OBR would not simply calculate 90% of current pasty sales and score that to receipts. It would judge that pasty sales may reduce significantly due to the impact of the tax and hence forecast a lower receipt. It doesn’t assume that Government is in complete control of what happens when it comes to taxes – though as I’ve argued, it could potentially be more rigorous than it is – yet it does take that view when it comes to public spending. Even if Government said that it would cut public spending in one area or another by let’s say 90%, it seems to me that the OBR would have to report that this is the Government’s plan and give it a passing score on hitting its fiscal targets, no matter how unlikely that reduction in public spending might be. We could all complain that the 90% cut looks very unlikely indeed, or to demonstrate what its consequences might be, and the OBR might help us out a bit by pointing to risks, but it wouldn’t say that the Government will miss its fiscal targets as a consequence of these.