Earnings are up, but what about the self-employed?

SMF Chief Economist Nida Broughton argues that while today's low pay figures show that there have been positive developments in the jobs market, there is a missing piece from the widely reported national jobs market statistics – the self-employed, who account for 15% of those in work.

Figures out today show that weekly earnings are continuing to rise – with real-terms growth of 1.9% between 2014 and 2015. The increase has been felt across occupations and across the earnings distribution. Meanwhile, the ONS estimates that there has been a fall in the number of jobs that pay below the national minimum wage, either because of non-compliance by employers or because employees are not eligible. These jobs now account for 0.8% of employee jobs.

On the surface, then, there have been positive developments in the jobs market. However, there is a missing piece from the widely reported national jobs market statistics – the self-employed, who account for 15% of those in work. Their earnings are not included in the ONS’s figures. This is particularly problematic, because other research suggests that they typically earn less than employees, and are more likely to be in low pay.

Little is known about this group of workers who stand outside many of the official statistics, and outside many areas of employment regulation and protection. They are not covered by the minimum wage, for example, and so are not covered by the increases coming in between now and 2020. Some may be making a choice to earn less – they might have a partner who earns more, they might be making a choice to balance work with other responsibilities like childcare, or they be at the start of what will turn out to be a growing and lucrative business.

Yet it is highly unlikely that this is the case for everyone. The top occupations for the self-employed are in construction, taxi-driving and carpentry. These are sectors where winning work is likely to be highly competitive. The prospects for business growth are likely to be slim.

In London, gaining a better understanding of the experience of those in self-employment, and the barriers they face to income growth is particularly pressing. 17% of London’s workers are self-employed, the highest concentration of all UK regions. Research based on 2009-10 found that 40% of London’s self-employed earned less than £15,000 a year, and are more likely to be in low pay than employees. Rates of business births are at their highest in London, but so are business deaths. At the same time, London’s relatively high cost of living means that day-to-day and month-to-month volatility in self-employment income is likely to be especially hard to cope with. 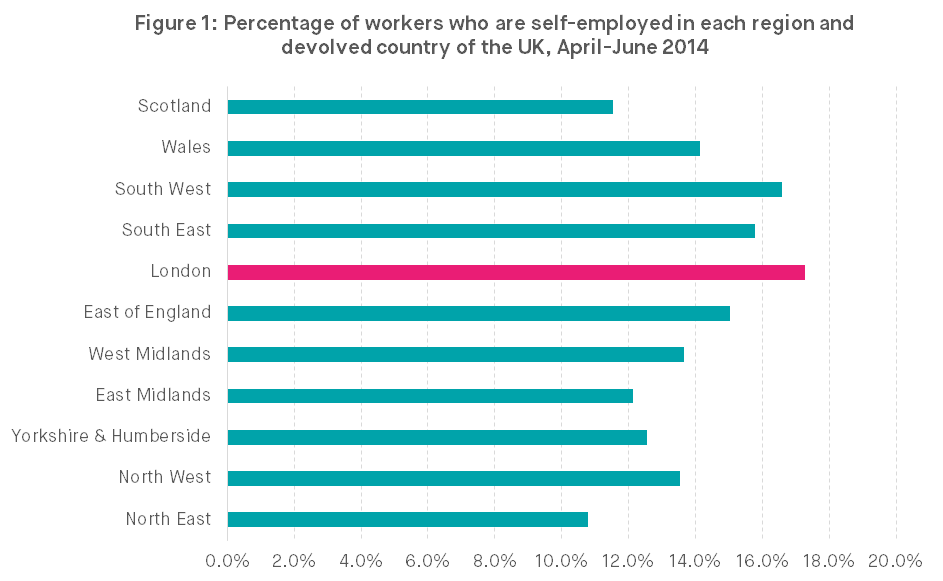 Here at the SMF, we’re kicking off research kindly supported by the Trust for London, designed to look at the scale and characteristics of Londoners in low-paid self-employment. We will be looking at what sector they work in, their age and gender. We will also be examining what factors are associated with escaping low pay – whether it is training and skills, moving sector, taking on employees, or changes in family circumstances. Our research will involve analysis of earnings data, as well as interviews with low-paid self-employed people and charities and organisations focussed on helping those on low incomes. We will use the research to develop recommendations on what should be done to help Londoners trapped in low paid self-employment to move into higher pay.