Housing market slowdown unlikely to do much to increase homeownership

The housing market in the UK appears have reached a turning point.

Figures released by the Bank of England showed that mortgage approvals fell to their lowest level in seven months in April. This follows data from Nationwide which showed house prices declining in the same month – the second consecutive month of falling property values. The period of strong price growth which began in 2013 has drawn to a close.

In part, the latest housing market developments are likely to reflect tax changes which came into effect last year. A stamp duty surcharge on second homes, including buy-to-let investments, has curbed demand in this space.

At the same time, unaffordability may have reached unsustainable levels, with house prices reaching levels so in excess of incomes that the demand is no longer there. As such, sellers’ unrealistically high expectations of home values are starting to adjust to reality.

Chart: House prices remain much more unaffordable than in the early 2000s 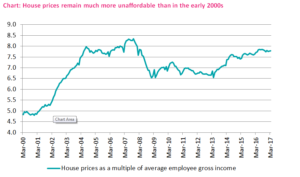 An immediate question is whether the current cooling in the housing market will translate into a sustained improvement in prospects for those wishing to buy a home. We believe that the answer is no.

Declines in house prices are likely to be modest and not prolonged. Fundamentally, the supply of housing is not growing at a sufficiently rapid rate to offset increasing demand, which limits the scale of any price declines. Further, with interest rates remaining at low levels, property arguably remains a very desirable form of investment, even in the presence of higher rates of stamp duty.

The number of existing properties being put up for sale in the UK remains remarkably low. Rather than accepting lower prices, sellers may instead choose to take their properties off the market, which in turn limits the extent to which prices can fall.

House prices are in all likelihood just taking a breather – softening slightly after getting ahead of themselves. Fundamentally, the UK’s housing market is dysfunctional and in need of drastic policy reform.