More mis-selling – when will the banks learn to behave?

Another day, another set of headlines about banks mis-selling. From this week more than two million UK credit card users who were sold fraud protection they didn’t need will be able to claim compensation. Though the amounts involved are smaller than the PPI scandal, which has to date cost banks £24 billion, this episode will do little to improve customer faith in banks.

We might hope, after the creation of the Banking Standards Board and endless enquiries into culture in banking from various government, industry and third sector bodies, that steps have been put in place to ensure consumers receive a fair deal. Banks claim to have scrapped the sales targets which incentivised staff to mis-sell products in the pre-crisis years. A new Which? poll of bank staff at five major bank groups published earlier this week, however, found that more than a quarter (28%) of staff still sometimes feel expected to sell whether or not the product is appropriate for the customer. This has fallen from nearly half of staff (48%) when Which? first carried out this survey in 2012, but suggests that inappropriate sales incentives are still a significant problem.

Should we really be surprised by this? For all the grand talk of cultural change, where we have seen an increase in competition in the last two years it has been firmly focused around prices – witness the fierce competition in the current account market at present. This isn’t a bad thing – some customers at least are getting a better deal, as our recent report Playing the Field demonstrated. But consumers are used to weighing up different factors when making choices – quality, customer services and choice. There’s no reason why stronger price competition can’t exist alongside competition over bank behaviour.

At present, however there is little evidence that consumers are choosing their financial services providers on the basis of culture. As we argued in Good Culture, this means there’s little competitive advantage for banks in improving behaviour. Given the time and costs involved in cultural change, it isn’t surprising that without any reason to expect a competitive return on their investment, banks haven’t fully committed to the programme.

We often hear that consumers are apathetic about banks; that they think all banks are as bad as each other, meaning they focus on price rather than behaviour when choosing a provider. Our consumer polling, however, suggested that nearly two-thirds of consumers (60%) would consider switching financial services providers if their current provider was behaving unethically. So why aren’t they moving? Our research suggests the problem is a lack of information. UK consumers don’t feel that they have adequate information about the way banks behave, and so they don’t pay much attention to it when making decisions. Across the board our research suggests consumer awareness of behaviour is much lower than the importance they attribute to it. 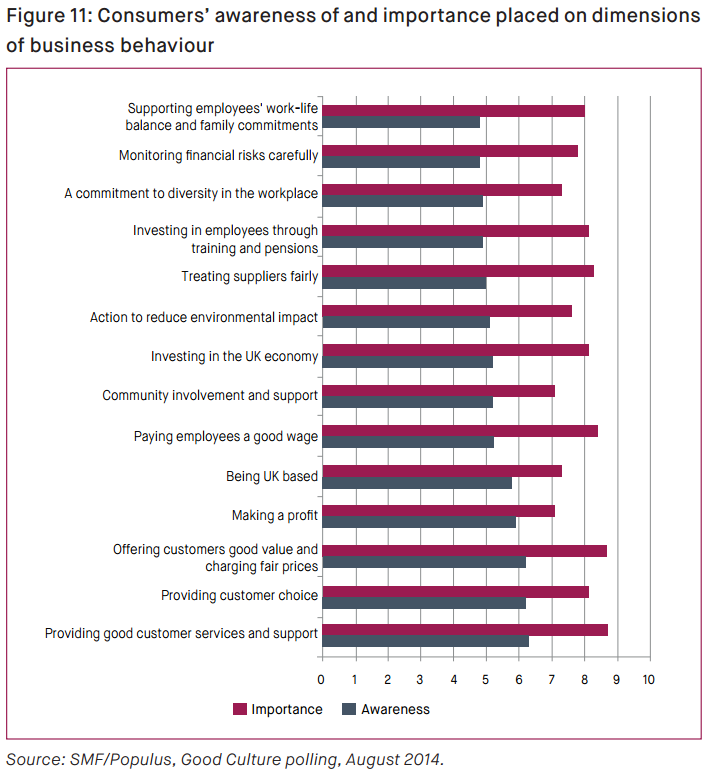 Strengthening competition between banks on the basis of behaviour would provide a clear incentive to improve corporate culture. And, rather than relying on individuals to avoid the temptation to gain an incentives system, it would help to create a self-regulation internal culture of positive business behaviour. With the success of the whole firm at stake, each employee would have a true incentive to ensure they make the right decisions, and to make sure their colleagues do the same.

Efforts to improve the information about bank behaviour available to customers have already begun, through initiatives like Fairer Finance but to maximise impact, we need a single, national scheme providing clear information to consumers about how banks’ behaviour stacks up. The Banking Standards Board has a great opportunity to get this going – they already plan to collect data on bank behaviour from executives down, the crucial question is now how to make that information easily accessible to consumers. We’ve had enough archaic reports cataloguing banks’ failures. It’s time to let competition make financial services firms count the costs.