Pension freedoms: Thinking now about the retirements of tomorrow

The UK pensions’ landscape has changed dramatically following the implementation of the ‘freedom and choice’ reforms on 6 April 2015.

Before, there was an effective requirement to buy an annuity; now, pensioners can spend their savings as they wish.

These reforms may bring gains: saving may become more attractive and people may take greater ownership of their pensions, and the market will hopefully evolve to offer more innovative products to meet the increasing diversity in retirement patterns. These can all be to the good.

Alongside these potential advantages, there are, however, possible risks to which both individuals and the state are exposed. These are, by their nature, long-term risks: a consumer’s decision at retirement needs to be right not just for year one, but also at year ten, year twenty, year thirty and beyond.

Thus far, the evidence from the UK is incomplete and the bulge of retirees affected by these reforms means domestic data is unlikely to be instructive for some time yet. For this reason, we publish today our new research report, Golden Years?, looking abroad to understand the range of behaviours from countries that have had similar pension freedoms to the UK. Both Australia and the USA offer interesting lessons here. In both, there is significant reliance on DC pensions and individuals also have freedoms over how they spend their pension savings. This is not to downplay differences between the UK and these comparators – for instance the means-tested pension in Australia means that Australians potentially have a stronger incentive to spend their pensions than retirees in the UK for whom such incentives exist but may be less powerful.

However, understanding how consumers have behaved in these countries provides useful insights into the range of potential long-term consequences of the pension freedoms in the UK. While we can’t predict how UK retirees will use their new choices, by looking overseas we can illustrate the risks they, and society, might face.

The first point to note is that very few individuals buy an annuity (5% in Australia and 10% in the USA). This is far below the historic rate in the UK (75%). Below this, the evidence reveals considerable variation in decumulation patterns in both countries. Interestingly, the average (mean) behaviour in Australia is a cautious one, preserving capital by reducing wealth by less than 1 per cent a year. Alongside this, a significant minority – estimated at around one in four – spend their pension savings quickly, running out by age 75. In the USA, of those who draw down on their pension savings, the average rate of withdrawal is 8% per year.

At the heart of the report, modelling carried out by the Pensions Policy Institute reveals the implications for UK retirees were they to follow these paths as compared with purchasing a guaranteed income for life. Several results stand out:

These insights from international experiences should signal to us some of the consumer behaviours that policymakers should be alert to. Identifying the early warning signals could help the Government make sure that the market is functioning effectively, that support systems are appropriate and that individuals are helped to make well-informed decisions.

Our central recommendation is that the Government corrals data from a range of sources to provide effective monitoring through an Early Warning System. This would comprise two elements. The first, a ‘Retirement Risk Dashboard’ would provide an overview of retiree behaviours, such as pension balances and cash withdrawal, insurance take-up, levels of investment risks and take-up of guidance and advice. Figure 1 below sets out some of the metrics that we suggest the Government could scrutinise. 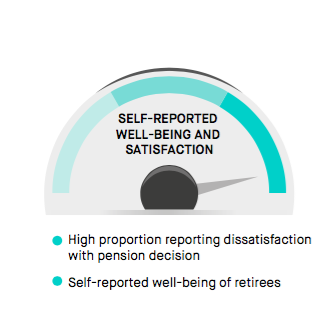 Source: Golden Years? What freedom and choice will mean for UK pensioners, SMF (2015)

The second part of our Early Warning System would be ‘Personal Pension Alerts’. These would be more tailored to sub-groups identified as particularly vulnerable. Potential interventions could include: targeted support and advice; initiatives to make retirees think twice before taking one-off decisions such as withdrawing all their pension savings; and, a ‘Mid-Retirement Financial Health Check’ to encourage older people to reconsider their financial position for their later years.

Our call comes shortly after both the FCA and the DWP Select Committee called for greater monitoring of what individuals are doing with their pension savings. Monitoring these outcomes and putting an infrastructure in place could help retirees achieve the best out of the new freedoms given to them.