Political Philosophy in a Pandemic

This blog reflects on the recent launch event for 'Political Philosophy in a Pandemic: Routes to a More Just Future', a new book by the SMF's Chief Economist, Dr Aveek Bhattacharya.

“Crisis often goes hand-in-hand with opportunity, and in some ways that’s quite an uncomfortable thought…but it is nonetheless true that the pandemic has expanded our sense of what we’re capable of as a society or a polity just by the scale of the response”, said the SMF’s Chief Economist, Dr Aveek Bhattacharya at our recent event launching his new book ‘Political Philosophy in a Pandemic: Routes to a More Just Future’. The pandemic “created an appetite for change”, which as we begin to head towards a new normal, is seemingly growing weaker and weaker. Aveek posed the question, “how can we make the most of this moment of potential change before it evaporates and before we lose it?”

Aveek was joined on the panel by three of the book’s contributors[i], and Jesse Norman MP to explore how the pandemic has impacted politics, and the lessons we can learn from it.

Adequate Housing in a Pandemic

The pandemic has put a spotlight on the long-standing issue of housing inadequacy in the UK. In her contribution, Dr Katy Wells highlighted the importance of adequate housing in the context of a pandemic, particularly as what would have been considered adequate previously will have “transformed into inadequate housing”.

During the first lockdown in Spring 2020, 12% of British households had no access to private outdoor space, rising to 21% in London. With coronavirus restrictions in place, people were more confined to their homes, increasing the effects of inadequate housing. Outdoor spaces such as parks can have a great deal of benefits to the health and wellbeing of the public, as explored in this SMF briefing paper.

“People already in inadequate housing…are going to experience additional burdens in comparison to others during a lockdown period”, said Dr Wells. At the beginning of the pandemic, one in three households in England had at least one issue of housing inadequacy, such as overcrowding, poor quality housing or affordability. The 2019 English Housing Survey found that 23% of privately rented homes and 12% of socially rented homes did not meet the Government’s Decent Home Standard.

The Government did take some measures on housing adequacy during the pandemic, for example investing £105 million to support rough sleepers, and increasing the eviction notice period between March and September 2021. Whilst welcoming these steps, Dr Wells argued that they did not go far enough to  “deal with all dimensions of housing adequacy”, and ultimately people who have lived in inadequate housing throughout the pandemic will have suffered more of the consequences of the pandemic as a result. In her chapter, Dr Wells goes into greater detail about recommendations for resolving the housing adequacy issue, including: increasing the availability of social housing, reviewing any restrictions on outdoor spaces during a pandemic, and ensuring that those at risk of losing their home are protected.

What is the Democratic State’s Obligation to Transparency in Times of Crisis?

“Imagine that you’re in the middle of a deadly pandemic…[and] you hear this astonishing rumour from an excellent source, suggesting that the State had gained reliable information a while back that wearing a mask not only significantly reduces your chance of catching the disease but also passing it on. Yet this information was not passed on to the public”, began our next panellist, Rebecca Lowe. Whilst the initial response to this situation may be anger, would this change if you later learn the Government’s reasoning for withholding the information?

The majority would likely consider government transparency to be very important, and the UK Government commits itself to ‘Open Government” with its biannual National Action Plan. However, are there ever any justifiable cases for a government not to be fully transparent with the public? Lowe argued “there may be some particular temporary cases in which the state is justified in holding back a limited amount of information for a limited amount of time, as long as certain conditions are met”.

Setting out a framework to determine when a state’s non-transparency is justified, Lowe said “the state’s general obligation to be transparent involves meeting reasonable thresholds related to accuracy, context and publicity…as this obligation correlates with people’s rights (and rights should not be overridden in my account), at least the obligation should not be compromised, even in times of emergency”. In the context of a pandemic, an example of unjustifiable state non-transparency would be a government withholding information about the effectiveness of mask wearing in preventing the spread of the disease in order to protect the supply of masks to healthcare workers. This is because “the state is specifically depending on the public’s lack of knowledge abouts its actions and reasoning in order to bring about unrevealed and unjustified aims.”

In the 21st Century, social media and the internet are crucial in communicating important information. However, with billions of users worldwide it is now easier than ever for misinformation to spread across large populations, particularly in the context of the pandemic when misinformation about the origins of COVID-19, treatment and mitigating the spread of the disease has been rife.

“Misinformation about Coronavirus has been objectionable for a number of reasons. But the most important reason is that it can lead to harm”, said Dr Jeffery Howard. Despite experts debunking much of the misinformation, the spread of misinformation over social media can have a harmful effect beyond the internet. It has led to people making high-risk decisions that lead to exposure, encouraged self-medication (as seen in South America with citizens drinking chlorine dioxide to ‘cure’ the disease), and sadly resulted in an increase in anti-Asian hate crime.

This event launched ‘Political Philosophy in a Pandemic: Routes to a More Just Future’, by Dr Aveek Bhattacharya and Fay Niker. The book, which originates from their blog ‘Justice Everywhere’, explores how COVID-19 has affected issues such as social welfare, justice, democracy and equality. You can watch the event in full here.

[i] The panellists for the event were:

Political Philosophy in a Pandemic: Routes to a More Just Future 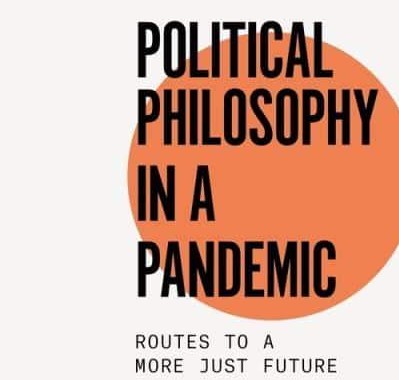