Probate reforms: not a stealth tax but a progressive policy change

Probate fees are due to change unless there is a formal objection.

The proposed changes have come under fierce opposition for being a “stealth tax” and a “tax on grieving families”. There is even a suggestion that Labour may launch a formal objection. However, SMF analysis shows that the changes are more progressive and an uprated flat fee would leave many worse off.

Under the current rules probate fees apply on estates above £5,000, the fee is a flat charge of £215, although the fee is marginally lower (£155) for those who go through a solicitor. This fee does not change as the value of the estate increases. The proposed changes which are due to come into effect later in the year will replace the flat fee for a charge that increases with the value of the estate.

*fee is £155 if going through a solicitor

Almost a quarter of those in the lowest wealth quintile will be exempt under the proposed changes, as the value at which an estate is exempt will increase to £50,000. Under the old system this group was losing approximately 0.8% of its estate’s value in probate fees, whilst those with the highest value estates paid the smallest proportional fee. It is clear to see that the changes will be more progressive in nature and create a fairer system.

Figure 1: Probate fee as a proportion of wealth under the current and proposed system 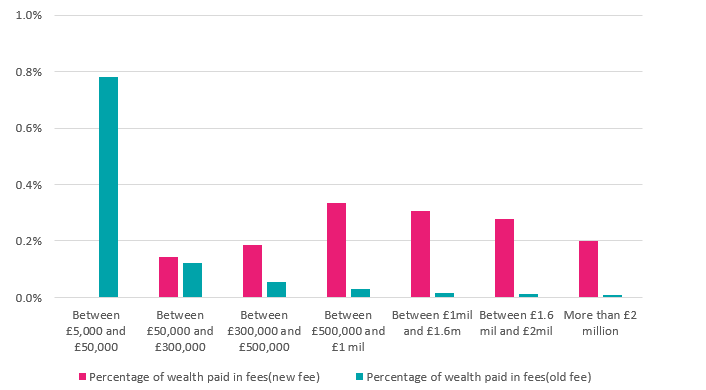 Whilst the maximum fee will increase to £6,000, three quarters of households will pay less than £750 in probate fees. According to our analysis of the Wealth and Assets Survey we estimate that under the old system more than half (51%) of the money raised from probate came from those with estates below £300,000. Under the new system this would reduce to just 10%.

Figure 2: Proportion of revenue raised from probate fees paid by each group

If we are to raise the desired amount that the government believes is needed for court services but keep a flat fee, then the fee will need to change. The SMF calculates that in this instance the fee would need to increase to £851. Six in ten (62%) estates would be paying larger fees under this system compared to the new system and all would have estate values of less than £500,000. Under the proposed changes estates with value between £50,000 and £300,000 will have to pay an additional £35 in probate fees compared to the current legislation, however they will be £601 better off than if the flat fee system was simply increased to bring in the same revenue.

Given the extent of wealth inequality within the UK a policy that is progressive in nature and makes 25,000 families exempt from probate fees should be praised rather than demonised. If the government is adamant on raising more money from probate the real question is do we want a flat fee system where everyone pays £851 or a progressive system where the burden is felt more equally across society?

Note: The SMFs calculations are based on wealth and assets survey 2014-2016. Household wealth is used to value the estate (not including pension wealth). It is based on households where the household reference person is aged 65 to 74 (England and Wales only). Our figures may not be directly comparable to the government’s calculations due to the use of £215 as the flat fee and the lack of available data on wealth at death.