Post-Brexit regulation and the report of the Taskforce on Innovation, Growth and Regulatory Reform

If you recently received our SMF Monthly newsletter and are looking for a blog on curriculum reform in England, Scotland and Wales, click here.

The Taskforce for Innovation, Growth and Regulatory Reform published its final report recently. The Taskforce – spearheaded by three veteran Conservative MPs – was set-up to examine how the UK’s regulatory environment, after Brexit, could be improved in order to foster more innovation and facilitate the competitiveness of high-growth sectors of the economy. The report was far from perfect, but more balanced than many might have feared. This blog looks at some of the good bits and the bad bits.

Moving on from the sterile debate of the past

The debate over regulation has been cast in simplistic, binary terms for too long. There have been, broadly, two camps:

The debate, no doubt, has been so bifurcated at times because of its ultimate unimportance: until recently, Britain’s regulatory environment has largely been shaped by the EU.

Now, the contours of the old debate need to be urgently cast aside and new ones, more conducive to better policy-making, need to be developed.

A realistic debate requires the recognition of some inescapable realities about regulation. The report, in this regard offers hope, as it is not a pean to de-regulation but is much more measured. It appears to accept much of the following:

Table 1: the “system” of factors that determine the impact of regulation on society and the economy 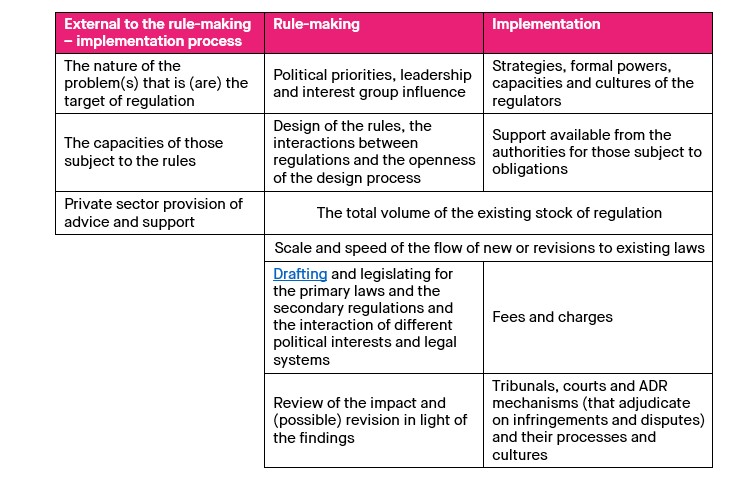 What, in the report, is good

The overall tenor of the Taskforce report will contribute to moving the regulation debate in this country onto a more reasonable footing. If for no other reason, it should be welcomed. However, there are other reasons to appreciate it, too. These include a number of the positive observations and suggestions that are made in it, including:

Where it goes wrong

Despite the positives, there are a number of substantial problems with the report proposals. Four are briefly sketched out below:

“…every new regulation that imposes a new financial burden on firms must be offset by reductions in red tape that will save double those costs”.

EU laws have been exempt from this requirement, for the obvious reason that they were largely out of the ambit of control of the UK government. However, Brexit has rectified this ”gaping hole” in the previous implementation of the policy. Nevertheless, other problems with the system remain. Perhaps the most serious being the frequent failings of Regulatory Impact Assessments (RIA) to accurately measure the costs and benefits of a regulatory proposal. Errors on the “cost side” for example, include examples of significant underestimations of the administrative and compliance costs of proposed laws and the failure to  take account of the potential long-term dynamic impacts of regulatory proposals on competition and innovation, among others.

The next few years provide a once-in-a-generation opportunity for putting the UK’s regulatory policy making on a long-term footing, which will serve the county well for decades to come. The Taskforce’s report is a welcome contribution to starting the process of making the regulatory environment “fit for purpose”. Therefore, the current Government is right to welcome the report’s findings and some of its proposals would almost certainly help improve the UK’s current regulatory environment.

However, no report is ever going to be able to adequately consider every aspect of the extensive transformation that regulation-making and the regulatory environment in this country needs. Including what the key lessons are from successful examples of regulatory reform in other countries.

As the Government considers which, if any, of the proposals in the report it might implement, it should, first, look at what the UK could reasonably import from successful places like British Columbia, which have the advantage of offering that rare thing: a tried and tested model of regulatory reform, which the UK could, and indeed should, borrow from.