Will the new Living Wage make up for the cuts to Tax Credits? Yes and No.

The Chancellor today announced two big changes affecting those in low paid work. The big question is: will the wage increases under the new Living Wage be enough to offset these cuts to tax credits?

Firstly, there will be a big cut in tax credits. The income threshold beyond which tax credits are withdrawn will be reduced from £6,420 to £3,850; whilst the taper rate at which they are withdrawn will be increased from 41% to 48%. In addition, all working-age benefits will be frozen for four years. But the Chancellor also announced a new compulsory Living Wage: over 25s will be entitled to an hourly wage of £7.20 from April 2016, with the Low Pay Commission being asked to ensure it reaches at least 60% of median earnings – expected to be over £9 per hour – by 2020.

Here we take a two child family, with one full-time earner (aged over 25) currently being paid the National Minimum Wage (NMW), and consider their income before and after the changes. [1]

Currently, working 35 hours a week at the NMW of £6.50 per hour gives an annual gross salary of around £11,860. Earnings are just above the Income Tax Personal Allowance threshold, so they will pay a small amount of income tax; and earnings are substantially above the NICs threshold so they are also eligible for National Insurance. These reduce their income by £252 and £453 respectively. But they are eligible for substantial child benefit and tax credit payments, totalling £1,793 and £8,653.

The difficulty is that the family wouldn’t be able to keep all of their gross wage increase. In fact, they would lose a great deal of it. The earner is eligible to pay both Income Tax and National Insurance, reducing the gain by 32%. When we combine this with the new, steeper, tax credit taper rate of 48%, they lose 80% of any additional gross income. 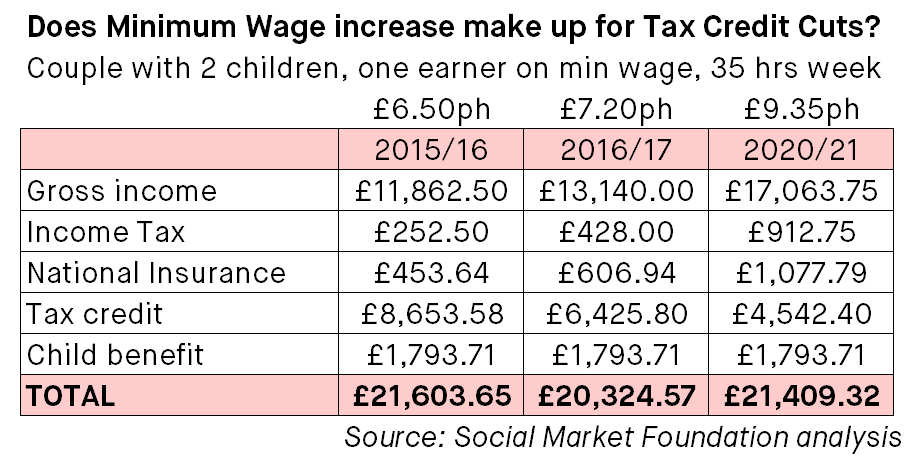 The huge impact of the high marginal deduction rates is illustrated by looking at a second family type (table below), still with two children but with two full-time earners. This family is actually better off because of the reforms by 2020/21. Once their wages are increased such that they are no longer eligible for tax credits, their marginal deduction rate drops markedly – as only Income Tax and NICs are deducted for their increased gross salary. However, even this family face a substantial fall in income in 2016/17 as a result of the tax credit cuts. 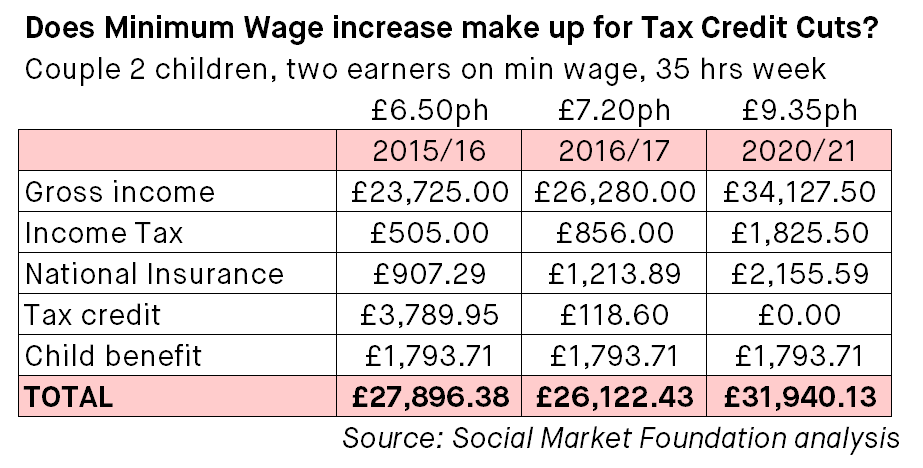 So in reality there are two lessons from Tax Credit and Living Wage announcements today. One is their differential impact depending on family type, by 2020/21 at least. The other is that, although in theory an increase in gross earnings can make up for losses in Tax Credits, the fact that families face very high Marginal Deduction Rates, from tax, NI and reductions in Tax Credits, means that in practice much higher wages are needed to make up the shortfall.

[1] We assume they claim tax credits and pay income tax and employees’ national insurance, but they are not claiming housing benefit or council tax benefit. We’ve also assumed that the family is assessed for tax credits under the existing tax credit system, and has not been moved over to Universal Credit.