Work, work and yet more work

The slogan ‘For Hardworking People’ was everywhere at the Conservative Party Conference: on the brochure, on large blue banners suspended from the ceiling, even emblazoned across the entrance to the Guardian marquee. But what is the party’s message to hardworking (or hard-working) people? And shouldn’t we be aspiring to an economy in which people work less, not more? 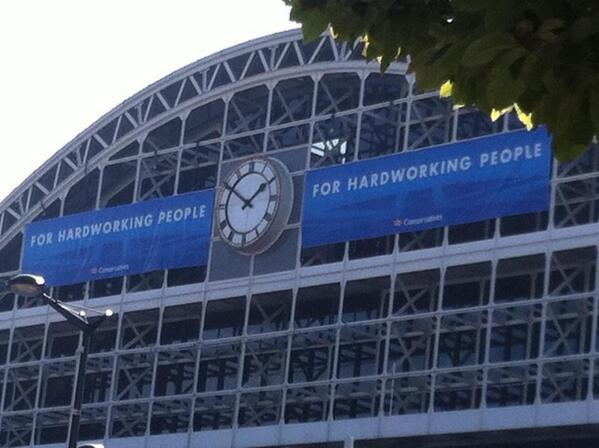 The Coalition Government has cut taxes for hardworking people by raising the threshold at which the taxation of personal income begins. Though this wasn’t a Conservative pledge in the 2010 manifesto, the party and David Cameron himself have embraced it. There have been positive policies on education and childcare too.

But the big narrative is that the Conservatives are creating – and will continue to create – a safe fiscal environment in which public finances are tightly managed, public services deliver more for less and the private sector produces growth.

In other words, hardworking people, whether their work is in the public or private sector, should keep looking for new ways to work hard.

Jeremy Hunt announced at the conference that there will be trials of longer opening hours for GPs’ surgeries. This supports hardworking people in continuing to work hard. Rather than taking time off work to see a doctor, they can keep working while they feel unwell, knowing that the GP can be reached at the end of the day or over the weekend.

Labour had a similar message at their conference, announcing an ambition that schools should be available 8am-6pm to look after the children of hardworking families. Of course both this and the initiative on GPs’ opening hours are intended to be helpful, But perhaps in practice what the schools announcement means is that an employer will be less sympathetic to a parent who wants to finish work at 4pm to see their children, because they can point to the fact that the employees’ children can stay in school as late as 6pm.

The Conservatives also announced plans for long-term unemployed to work for benefits if they emerge from the Work Programme without having gained a job; and there was a hint that there would be a similar ‘something for something’ requirement in the future for young people who are not in education or employment to receive state assistance. More work, and yet more work.

Is more work the answer?

While this emphasis on work and reciprocity will resonate with very many people, there will be a strand of older school conservatism represented by the thinking of someone like Roger Scruton, for which the spread of production and contractualism (as they might see it) is a worrying trend, posing a threat to other civic values.

There might also be a question as to whether our economy can sustain much more work. The long-term trend is that the quantity of work is decreasing, whether due to a shift in our economy from labour-intensive to knowledge-intensive industry sectors or due to the aggregation and automation of tasks.

Perhaps rather than focusing on more hard work, our economic future lies in seeking more brainy work, which may very well take less time than the work we have done traditionally or be more flexible in nature. For example, we don’t need longer GP opening hours if we can continue to tap out emails or make charts on a mobile phone while waiting for an appointment.

This work-life integration might also mean that parents won’t use the longer school hours that any future Labour government might want to offer them, or the only ones who might use them are parents with less negotiating power in the workplace, and so the longer school day will create a new social division between the children of the haves (parents who have time) and the have-nots.

‘For Hardworking People’ is a good slogan, and it is increasingly becoming received wisdom that the next election will be about living standards, but living standards are about more than work and money, they are about time with family and time to rest as well. It’s harder to craft a slogan for those non-productive values, but it’s important not to forget about them too.