“Cut ISA allowances to fund saving support for the low-paid”

Tax-free ISA allowances should be cut so money can be used to reward saving by younger people on low incomes, a think-tank says today.

The Social Market Foundation made the call as it published analysis showing that many workers who face unemployment and pay cuts over the Coronavirus crisis have no financial savings to fall back on.

Almost a third of households on the lowest incomes have no savings in bank accounts, and almost half were saving nothing from their income before the pandemic, the SMF calculated, warning that these low-paid workers will bear the brunt of the economic downturn.

While overall savings levels have increased during the crisis, as many households reduce spending on travel and going out, the SMF’s Research Director Scott Corfe warned that such national-level data “mask” the financial pain experienced by many on lower incomes.

“While many of those who went into the pandemic in a secure financial position have benefitted, some people who started the year in a financially precarious position have seen their circumstances worsen,” Corfe said in a new briefing paper.

To support savings and financial resilience among the low-paid, the SMF said that ministers should consider an “auto-enrolment” workplace savings schemes, where workers, employers and the Government all contribute to a savings account.

ISAs, which allow savers to invest tax-free, cost the Treasury £3.3 billion a year.   That money largely benefits older, wealthier people.  HMRC data show that ISA investors aged 65 and over hold an average of £49,161 in tax-free accounts, compared to £5,629 for people under 25.

ISAs also cost the Treasury large sums to support the savings of the very highly-paid: for ISA savers with incomes of £150,000 or more, ISA values average close to £85,000.

SMF analysis of Bank of England Survey data from 2019 suggests that, among households in the bottom income quartile, the median amount saved each month is just £12.

Close to half – 47% – were saving nothing from their income each month. Furthermore, close to a third (31%), had no savings in the bank that they could draw upon in an emergency situation. This compares to 8% among those in the highest income quartile.

“Current savings policies mean spending significant sums of public money rewarding saving by people on higher incomes who have large sums of cash to invest, at a time when many of low-paid workers face pay cuts and job losses and have little or no savings to fall back on”

The SMF has previously warned that the Covid-19 pandemic could strain Britain’s social contract by tipping the economic balance further away from younger people on lower-incomes.  The think-tank in April led calls for the Triple Lock on pensions to be abandoned.

“The current economic crisis has profound implications for intergenerational fairness, with the young bearing the brunt of job and income losses due to the coronavirus pandemic.

“Eliminating a tax relief that benefits older savers more, to bolster financial resilience among the young, would be a modest and fair measure.”

Tax relief on Individual Savings Accounts (ISAs) costs the government £3.3bn in lost revenue per year but households that are financially struggling are significantly less likely to have an ISA. 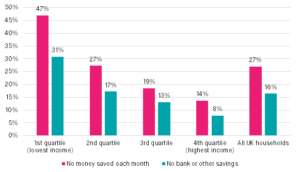 His previous Briefing on the case for reform of the Triple Lock was published in April and can be found here:  https://www.smf.co.uk/press-release-scrap-pensions-triple-lock-coronavirus/

The Social Market Foundation is a cross-party think-tank and registered charity that declares all its sources of financial support.   This Briefing was not supported by a financial sponsor – its costs were met from the SMF’s core budget.

White working-class students and black British students risk missing out if schools focus on A-Levels as the main pathway to university and professional success, a think-tank warns today.