Facebook data could help to address weaknesses in official immigration figures that mean the foreign-born population in many local areas is at risk of being badly miscalculated, a think-tank report says today.

A Social Market Foundation report shows that official estimates for the migrant populations of many British towns may be materially incorrect, raising the potential for local authorities and services in those areas to be given inadequate funding.

A sweeping overhaul of the way data on migration is used and presented is needed to ensure that local communities can be properly supported and feel the economic benefits generated by immigrant workers, the SMF report says. Greater use of commercial data from firms such as Facebook could lead to more accurate population figures.

The report also calls on British businesses to acknowledge the importance of the workplace in immigrant integration, deploying staff to work on community integration projects and abandoning single-language shifts where migrant employees work separately from British ones. British businesses should do much more to make the case for immigration at a local level in a way that resonates with the concerns of local communities, the SMF said.

The SMF, a cross-party think-tank, assessed the way local government and services deal with immigration in a report entitled “All immigration is local”, which urges politicians to put in place more accurate and responsive systems for counting and supporting local populations.
The report recommends reform of the Controlling Migration Fund, which is meant to help local authorities respond to financial pressures arising from population movement but currently has little impact. It should be enlarged and relaunched as a new Integrated Communities Fund more narrowly focussed on integrating migrants into local communities, the SMF said.

The report shows that official estimates for the migration populations of British communities are extremely uncertain and likely to be materially wrong. That means that public spending in those towns is unlikely to match their real populations, with possible consequences for public services.

In some cases, the potential variation in migrant numbers is more than 10% of the whole population. Boston’s entire population is estimated at 68,000, but the potential inaccuracy in the migration numbers means the town’s real population could be as low as 58,000 and as high as 78,000.
The SMF found that public sector bodies’ data on local migrant populations is limited and that accurate estimation is badly hindered by officials’ reluctance to share information with each other, with HMRC seen as especially unwilling to disclose useful data.

Even the government’s own Migration Advisory Committee cannot get access to all the data it wants to use for its work, the SMF noted.

Jonathan Thomas, SMF migration researcher said:
“Accurate data on local populations is essential for planning and providing public services, but our official statistics on migration and local populations are severely limited and innovative new thinking is needed.
“Commercial data like that held by the big technology firms could play a part in giving national and local planners a much more accurate and responsive picture of local population movements, allowing them to plan and manage better. Companies like Facebook could demonstrate their commitment to good corporate citizenship by working with government to make such data available.”
“Meanwhile, the public sector should be much better at collecting and sharing data that would allow the system to monitor and respond to population movements.”

The report also highlights business’ approach in the US where business leaders including Michael Bloomberg and Rupert Murdoch have worked with local and municipal leaders to use freely accessible data to study and highlight the benefits of migrant populations and their economic and social contributions at the local level in each district across the country. British business leaders and local politicians should learn from the New American Economy initiative as an example of how immigration’s benefits could be presented in a more user-friendly manner and acknowledging the concerns of local communities, the SMF said.
Notes: 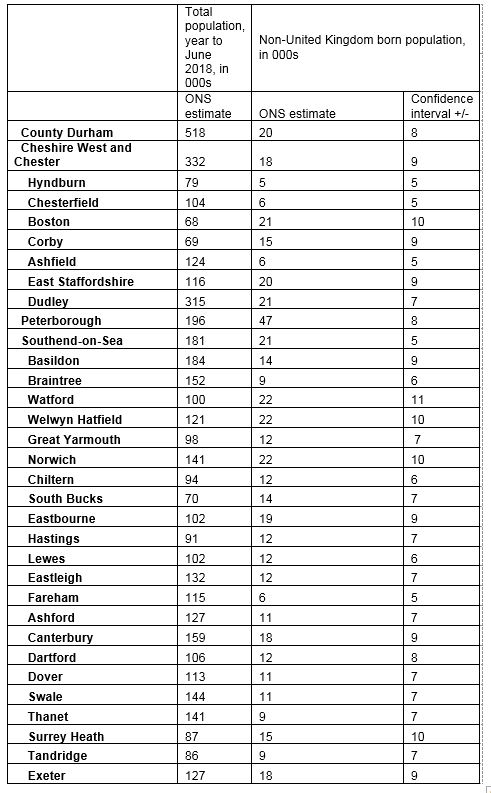 About the SMF:
The Social Market Foundation (SMF) is a non-partisan think tank. We believe that fair markets, complemented by open public services, increase prosperity and help people to live well. We conduct research and run events looking at a wide range of economic and social policy areas, focusing on economic prosperity, public services and consumer markets.  The SMF is resolutely independent, and the range of backgrounds and opinions among our staff, trustees and advisory board reflects this.
The SMF declares all sources of funding and retains complete editorial independence of its publications. This report was supported by Unbound Philanthropy, a grant-making foundation.