A clear majority of people approaching retirement don’t get advice or guidance on how to build up and use a pension, leaving many confused, anxious and at risk of missing out on a better quality of living in later life, a new study shows today

The Social Market Foundation think-tank said that gaps in knowledge and understanding of pensions and savings leave many people at risk of making inadequate preparation for retirement or spending pension pots unwisely.

The gap in the provision of good financial advice and guidance risks creating “real financial harm,” the report said, with opinion poll data finding that only 31 per cent of 50-64-year-olds with a pension have a broadly accurate idea of the savings they will need to deliver their desired income.

The SMF report was sponsored by Phoenix Group, a retirement and savings business. The SMF retained full editorial independence.

The report also states on average, people approaching retirement age are almost £250,000 short of the pension pot they would need to deliver the pension income they want in later life.

The typical person aged 50-64 has pension savings that are 58% short of what they require, adding up to a total annual savings gap of £132bn across the country for those reaching retirement age. (See Notes)

The SMF research also showed that majority of people don’t access either regulated advice from an Independent Financial Adviser about their pension (only 20% of 50 – 64-year-olds with a pension do) or free guidance available from the government’s Pension Wise service (only 14% of those accessing a defined contribution pension pot for the first time do).

As a result, many lack understanding of how much they need to save or how best to use their pension in retirement, the SMF said. While some people feel very confident about their pension knowledge, many feel anxious and ill-informed.

The move away from defined benefit (final salary) pensions towards defined contribution schemes has and will continue to increase the need for better advice and guidance, the SMF said, since it will only increase the complexity of the pension landscape for many people.

The SMF, a cross party think-tank, called for an overhaul of the rules around providing financial advice and guidance in a new report published at a Westminster debate today.  (See Notes for details.)

The report, A Guiding Hand, is based on extensive opinion polling and focus groups with people approaching retirement age. The report was sponsored by the UK’s largest long-term savings and retirement business, Phoenix Group. The SMF retained full editorial independence.

Other key findings on what people know – and don’t know – about pensions:

Findings on the barriers to becoming better informed:

“The blunt truth about pensions is that many people don’t know enough to make the decisions that would give them the retirement they want.  Poor information will mean poor outcomes for too many people.

There is a serious gap in the provision of advice and guidance around pensions, and that gap leads to real financial harm.

“The reality is the majority of people have to navigate the complexities of pensions on their own. SMF’s report identifies the cost of the huge Guidance Gap and how millions of savers could be substantially better off if this gap was closed. While regulated financial advice sets a ‘gold standard’ for helping people, it is not likely to be the solution for the vast majority. Even the Government’s free Pension Wise service is limited in its scope.”

“Across Phoenix Group we have around 3.5million customers aged between 50-64 making some crucial financial decisions without the level of guidance we believe they need. This does not sit comfortably with us.”

“Major initiatives over the past decade have encouraged pension savings – but saving more is than just one factor. We must now help people feel more comfortable in making financial decisions throughout their life to help them get better outcomes.  It is time to close the Guidance Gap. “

“At Phoenix Group we are calling for a government-led Working Group to be set up to foster collaboration between the regulator, the advice community, providers and consumer groups to review the rules and address this challenge, so that millions more savers get to a better place, and a better retirement.”

“On average people aged 50-64 have pension savings that are 58% short of what they require, adding up to a total annual savings gap of £132bn across the country for those reaching retirement age”

1) 58% – this compares what people think they need to save in order to meet their desired retirement income, with what an independent online calculator suggests would actually be the case. 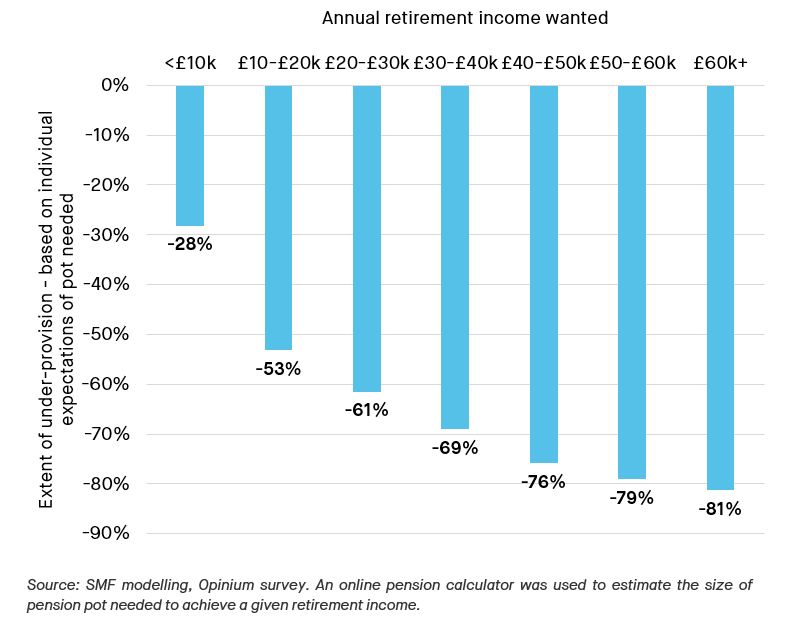 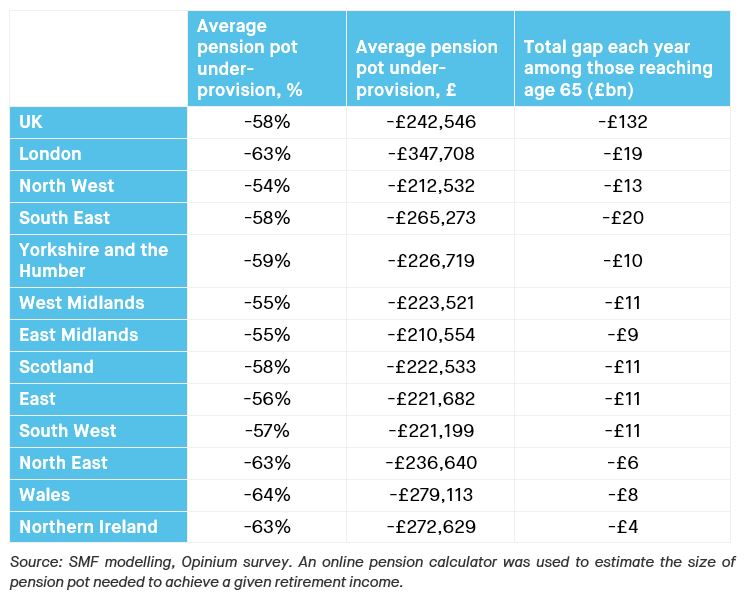