Accelerator Zones: how to turbocharge economic opportunity across the UK

This briefing paper, authored by Conservative MPs Bim Afolami and Laura Trott sets out the case for new "Accelerator Zones" to be established across the UK, designed to drive innovation and growth in university towns and cities.

Policymakers have long sought out how to increase levels of local economic growth, productivity and innovation diffusion. This proposal puts forward a place-based approach, drawing on Cambridge as a blueprint for success, with new Accelerator Zones designated throughout the UK, bringing together universities, businesses and local government. It builds on the Government’s City Deals and Enterprise (and University Enterprise) Zones, as well as the Northern Powerhouse and Freeports. 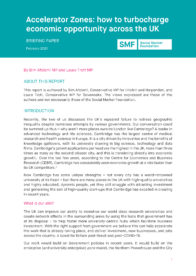 Relaxed visa rules and tax incentives should be used to turn cities and towns with leading universities into “Accelerator Zones”, a new report says today.

Full speed ahead: can Accelerator Zones turbocharge economic activity across the UK?

At this event, the Social Market Foundation launched a new policy paper from Conservative MPs Bim Afolami and Laura Trott. The paper – ‘Accelerator Zones: how to turbocharge economic opportunity across the UK’ – sets out a new blueprint for accelerating university-led local growth and innovation across Britain.
More
Commentary

A productivity silver lining? How COVID-19 has boosted tech uptake amongst SMEs

In this post, we reflect on our recent Ask the Expert event on the future of small businesses after the pandemic, held in partnership with UK Research and Innovation.