This paper discusses some of the issues facing ethnic minorities in the criminal justice system, and how policymakers might improve their outcomes – particularly by increasing their trust in the system.

No single measure on its own can strengthen trust and eliminate ethnic disparities within the system, but policymakers should explore: 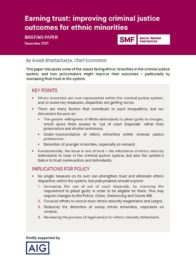 What does 'public service reform' look like in the 2020s? This briefing considers three ways the Government might seek to ensure increased funding for public services is efficiently used in a post-austerity era.
Read
Publication

This briefing paper examines adolescent obesity in Britain. It explores trends in obesity rates, their drivers and policy options for improving adolescent health outcomes and reducing the substantial societal costs of adolescent obesity and its frequent persistence into adulthood.
Read
Publication

The Retirement Housing Dividend: Exploring the case for an expansion of retirement housing in the UK

This provocation paper explores the case for an expansion of retirement housing in the UK. It demonstrates that specialist retirement housing brings with it a range of benefits to government, retirees and wider society. This “retirement housing dividend” should be quantified and considered by policymakers, and embedded into local strategies.
Read
Page 1 of 1