Self-Employment and Ethnicity: An escape from poverty?

Why are some ethnic groups more likely to be self-employed? Is it a route to social mobility or a reflection of being locked out of other jobs?

The last decade has seen a dramatic rise in self- employment. Some ethnic groups have been part of this rise, whereas others have actually seen a fall. What should we conclude from the fact that some groups are more likely to be self-employed? Is self-employment a route to social mobility? Or is it a reflection of being locked out of the rest of the labour market?

This Viewpoint looks at how self-employment compares, and has changed, across ethnic groups in the UK.

This paper was originally published by the Joseph Rowntree Foundation in July 2015 as part of its Viewpoint series. 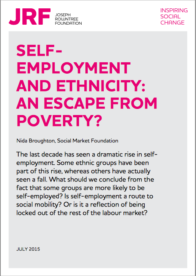 Self-employment is no easy route out of poverty

SMF Chief Economist Nida Broughton explores the latest employment figures and reflects on whether self-employment is an easy route out of poverty or whether it masks the scale of disadvantage that those from ethnic minority backgrounds face in accessing high quality jobs.
Read
Publication

This report looks at the growing problem of low paid self employment in the UK and offers recommendations on what the government can do to address this important issue.
Read
Page 1 of 1