Stuck in the middle with you

In response to the Government’s proposals for a 'New Plan for Immigration', this report argues that the UK should amend its existing immigration rules to allow safe and legal routes for more people to enter the UK on humanitarian grounds who can more easily integrate and make economic contributions to the UK.

Refugee resettlement efforts in the UK command broad support from politicians and civil society actors, but because the most vulnerable refugees are selected for entry to the UK on purely humanitarian grounds, many face huge challenges to integrating socially and contributing economically here. Focusing resettlement efforts solely on the most vulnerable – and determinedly not taking any account of refugees’ skills, employability or integration potential in the UK – risks undermining both political and public support for the UK’s refugee resettlement programme.

Therefore, alongside resettling the most vulnerable refugees, the report proposes new humanitarian routes to enter the UK, which can offer control and compassion but marry that with contribution. This could be achieved by: rebooting and reforming the UK’s Mandate resettlement scheme, which has existed for 25 years but is little used even though it allows those refugees with an existing connection to the UK to come here; and, adapting the Points Based System to award extra entry points to would-be migrants on the basis of the humanitarian distress they find themselves in.

These proposed reforms therefore build on and out from those existing UK immigration policies – refugee resettlement and the Points Based System – which have been a political success because they meet the public’s demand for security and control while providing flexibility over who enters the UK. It is this bedrock of support which provides the UK with an opportunity to go further on providing safe and legal routes for refugees, at a time when the global needs for refugee resettlement continue to far outstrip countries’ willingness to receive resettled refugees. 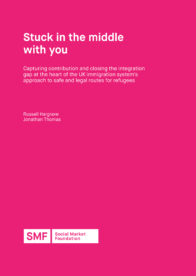 In its ‘New Plan for Immigration’ the Government has re-stated its desire to continue prioritising the resettling of refugees. However, it also issues concern that those refugees struggle to find...
Read
Publication

This briefing paper discusses the on-going war of words between the Government and refugee advocates over recent rhetoric on asylum and illegal migration. It sets out the complexities and challenges facing Britain's asylum system and makes the case for co-operation between both sides over increased participation in international resettlement schemes.
Read
Publication

Between a rock and a hard place

We need to talk about AVR again, and out of those discussions we can leverage the UK’s unique experience of AVR to launch a much more attractive and effective AVR programme.
Read
Page 1 of 1