If it makes you happy… What role does subjective wellbeing play in Levelling Up?

The Government promised to make a legal commitment to increasing wellbeing and reducing disparities in it across the UK. This paper considers how subjective wellbeing fits with the rest of the levelling up strategy, especially in relation to places that are prosperous, healthy and well educated, but nevertheless have low wellbeing.

The Department for Levelling Up, Housing and Communities should investigate the drivers of differences in subjective wellbeing between different areas, and develop a more targeted plan for closing disparities. 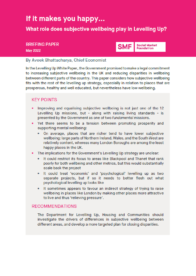 This briefing paper considers the liberal case for explicitly ‘pronatalist’ policies that aim to increase the birth rate in the UK.
Read
Publication

Getting the green light: achieving sustainability at a local level

This briefing assesses what role councils and businesses can play in reaching Net Zero and makes a series of recommendations for financing and delivering vital net zero projects in our communities.
Read
Publication

A matter of perspective? Outlook inequality and its impact on young people

This report explores young people’s “outlook” in the UK, the role of outlook in shaping life outcomes, and how policy can respond in the wake of the COVID-19 pandemic.
Read
Page 1 of 1