Green energy deals should be given official gold, silver or bronze ratings to prevent consumers being misled or confused about the real environmental impact of their energy use, a new think-tank report says today.

The Social Market Foundation said the energy regulator Ofgem should create a clear and simple ratings system for energy deals that are marketed as green. New rules on “green” products are needed to preserve consumer trust, an SMF report said.

The report comes as ministers and regulators investigate “greenwashing”, where firms overstate their products’ environmental benefits.

The SMF found that the existing system for describing green energy tariffs is outdated and allows some energy companies to mislead consumers about renewable energy.

Some companies selling “green” energy are actually generating power from fossil fuels but buy certificates relating to renewable generation carried out by others to cover the carbon emissions from their operations.

Such arrangements are poorly explained to consumer and SMF polling (see notes) found this could mean consumers are left confused and uncertain by companies’ “green” claims.

Two in five poll respondents (39%) said they did not know enough to decide what is meant by a green energy tariff, rising to almost half (47%) for those on lower incomes.

Nearly half (47%) of all respondents in the survey said that they wanted to know more about the sources of green energy, with only 22% agreeing that the current level of information is sufficiently transparent. (See Figure 1)

The SMF said that Ofgem should help consumers by officially rating energy deals on a simple three-point scale.

The scheme would reward those companies who provide tariffs which lead to demonstrable environmental benefits, like investing in renewable infrastructure and power generation.

The SMF report comes as the Government’s new Energy Retail Market Strategy commits to “ensur[ing] consumers are accurately informed about their personal contribution to Net Zero, with an initial focus on ‘green tariffs’”.

The Competition and Markets Authority is also consulting on new draft guidance for businesses to help them address the growing prevalence of greenwashing – the idea that consumers are misled about the environmental attributes of a company, product or service.

The SMF research, sponsored by ScottishPower, highlights increasing concern about greenwashing in the energy market, which could degrade consumer trust and voters’ support for the broader net zero agenda.

Concerns stem from the accreditation framework for green tariffs, which is almost two decades old. The system allows companies who buy their electricity on the wholesale market to purchase separate renewable energy certificates, even if the energy they are supplying isn’t from a renewable source.

Support for decarbonisation policies remains precarious, the SMF warned, and if consumers are made to feel misled by the green products they purchase, this could risk a political backlash against climate action.

The research also found that less advantaged respondents in the SMF survey were less likely to correctly identify what a green energy tariff means or to want to know the sources of green energy compared to more well-off respondents.

The report highlights that lower income voters in particular may feel disillusioned and exploited by claims that climate action is an unalloyed good, and may react against the net zero agenda.

The report also recommends more is done to scrutinise the role that Price Comparison Websites play as intermediaries in the energy market.

Whilst PCWs can empower consumers to make informed decisions, they can also operate their own badging schemes for energy tariffs. This may produce additional confusion for consumers, the SMF said.

“Consumers want to know whether their energy bill is doing more harm than good for the environment, and they shouldn’t have to navigate a bewildering system to understand that fact.

“The current accreditation system for green energy tariffs is outdated, confusing and risks consumers facing misleading claims from energy suppliers, who can legally market ‘100% renewable’ energy tariffs which aren’t what they seem.

“If the Government wants to help people understand more about their personal contribution to tackling climate change, it should work with Ofgem to introduce a badging system for energy tariffs which is crystal clear for consumers.

“Support for Net Zero hinges on business and policymakers’ ability to deliver trusted markets where clear lines can be drawn between what people buy and what difference those products and services make to decarbonisation.”

“Across the country more and more people are looking for ways to tackle climate change in their everyday lives. For many, this means signing up to a green electricity tariff. But at the moment, frustratingly, just because a tariff says its green it doesn’t always mean it actually is.

“We need to take action to combat greenwashing, providing a simple way for customers to understand more about the electricity they are paying for. With COP26 just over two months away we have an opportunity for the UK to demonstrate it is leading the way with its green practices. Having a green electricity tariff should mean you know that electricity you’re paying for is being generated by renewable energy and is helping support the much-needed growth in renewables over the next decade.”

Figure 1: Public attitudes on the sources of green energy, % 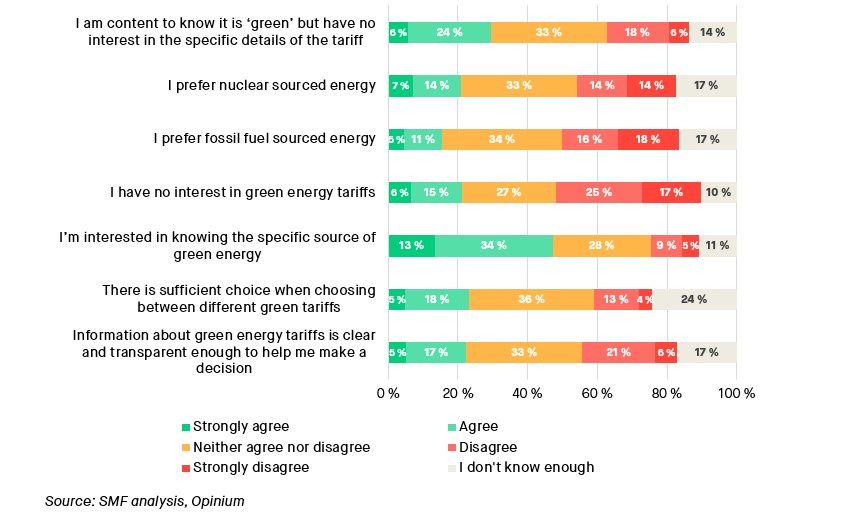 Britain risks more political and social turmoil unless politics and business offer more opportunity and respect to people who do not have a university degree, a former Cabinet minister warns today.