Public dislike of “unfair” fuel and road taxes is now so high that people would prefer to see a new system of road pricing put in place instead, new research shows today.

The Social Market Foundation think-tank found that voters are now more likely to support road pricing than oppose it.

The SMF and Opinium carried out polling and focus groups to explore public attitudes to driving and tax as ministers draw up new plans to fund roads in the era of electric vehicles.

Electric vehicles (EVs) do not incur fuel duty, which raises almost £30 billion a year for the Treasury. The rapid switch towards EVs – the all-electric Tesla Model 3 was the best-selling car in Britain last month – means the Government needs to find a new way of raising revenue from drivers.

The SMF research shows that conventional political wisdom – that voters are strongly opposed to road-pricing – is wrong because people now dislike the current system of tax so much they accept that pay-per-mile taxes could be fairer.

Four in ten (38%) people now support using pricing as a replacement to existing road and fuel duties. Crucially, only 26% said they were opposed to the idea.

Support for road pricing was broadly consistent across income groups and regions, the SMF found.

Drivers were actually slightly more positive about the policy than non-drivers: 40% of drivers in the SMF-Opinium polling support the introduction of road pricing.

Another 36% of people said they neither support nor oppose road-pricing, suggesting a significant cohort open to persuasion.

Focus group work for the SMF research shows that the key driver of opinion around road pricing is the strong public perception that the current tax system is unfair. A clear majority of interviewees said that motoring taxes are a much heavier burden and more  unfair than other taxes. (See Figure 1).

The SMF said dislike of the existing system and relative support for road pricing should encourage ministers to begin exploring how to design a fairer approach to motoring taxation, bolster the public finances and ensure that driving better reflects negative costs like pollution and congestion.

The Government should carefully consider how it designs any future system of road pricing the SMF said, with different options boosting and cutting public support.

A free milage allowance and using revenue to improve public transport infrastructure and the road network make a road pricing regime more appealing to the public, the SMF found.

Reforms could also ensure that road pricing is fairer than fuel duty, reducing the burden on lower income households

41% of respondents supported road pricing based on making an annual payment based on how much they drive every year. Opposition increased when respondents were asked if they would accept a “black box” in their vehicle or a mobile app tracking their milage.

“For too long politicians have thought of reforming motoring taxes as grasping the nettle, fearful that a backlash from drivers will hit them at the polls.

“In reality, the public want to see a better, fairer system of how the UK taxes drivers. Our research shows that road pricing, often perceived as politically poisonous, is seen as a preferential option compared to our existing tax regime.

“Britain needs a system of road taxes fit for the 21st Century and the age of the electric vehicle. It is vital that ministers recognise how far public opinion has shifted on road pricing over the last two decades. Voters will not punish them for seeking an equitable reform of motor taxation.” 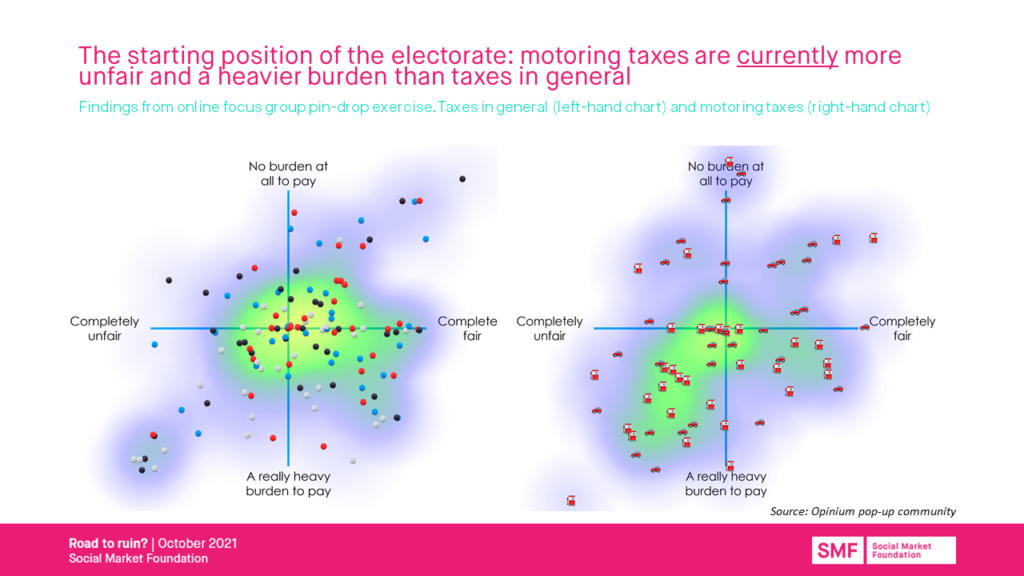