Childcare costs in the UK are contributing to poverty and gender inequality. As part of our cross-party Commission on Childcare, we're publishing new analysis on the extent of the childcare crisis - the impact of being dragged out of the labour market to look after children has a long-term, scarring effect on wages. We'll be engaging with stakeholders and developing policy solutions in Autumn.

Childcare costs are contributing to poverty. Government needs to act.

The SMF recently launched a cross-party Commission on Childcare, supported by John Penrose MP and Siobhain McDonagh MP. Through engagement with expert stakeholders, and new research, we want to provide policy solutions to reduce childcare costs in the UK, which are among the most expensive in the world.

Impact of childcare costs on those on low incomes

The Commission is particularly concerned about the impact of childcare costs on those on lower incomes.

The motherhood penalty on women’s earnings

Those opting out of childcare because of the expense face other costs – in particular, reduced income from being unable to work as many hours. Women are particularly affected by this.

These are not just temporary costs faced by families and, especially, women. The impact of being dragged out of the labour market to look after children has a long-term, scarring effect on wages. This analysis is displayed in the charts below.

We find that, even by 2018/19, women that had children faced a “motherhood earnings penalty” of about a quarter. This shortfall is similar among those in the bottom and top half of the income distribution.

We find that women in the bottom half of the income distribution face a greater income hit in the early years of parenthood, in percentage terms, with a key driver of this being a much sharper decline in hours worked (see Figure 2).

Something needs to be done to reduce the impact of childcare costs on household budgets and the ability of women to remain – and flourish – in work. With the UK in the grip of a cost-of-living crisis, politicians looking to provide solutions need to ensure that fixing childcare is a high priority.

If you’re interested in the issue, please read our read our call for evidence, and reach out to us at richa@smf.co.uk. 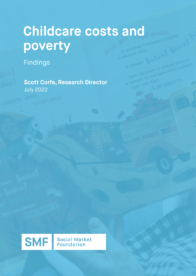 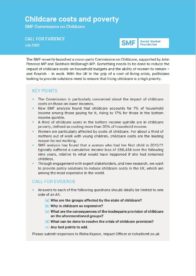 Childcare crisis means new mothers miss out on £70,000 of earnings

Women who have a baby miss out on almost £70,000 in wages over the following decade, according to a new analysis of the impact of Britain’s childcare provision.

This briefing paper considers the liberal case for explicitly ‘pronatalist’ policies that aim to increase the birth rate in the UK.
Read
Media Release